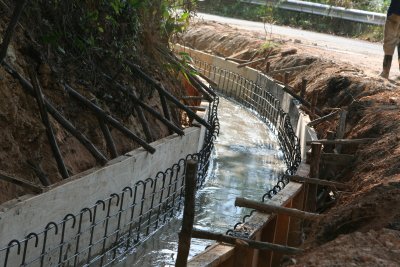 KATHU, PHUKET: Bang Wad Dam, one of Phuket’s most popular leisure spots, is getting a huge overhaul to turn it into a fully fledged recreational park.

A project is underway to add a new drainage system, a new bike path, new landscaping and build what is being called “the most beautiful toilet in Phuket.”

Mr Weerawat said the improvements are being made as a result of the dam gaining popularity in recent years, especially with local expats.

Foremost among the developments is the 9.7 million baht drainage system, which stretches 3,250 meters around the dam.

The system will redirect rainwater, which typically flows down the hills onto the dam’s encircling road which creates hazardous conditions and causes long-term damage to the road.

The new drainage will ensure virtually all the runoff will make its way into the dam.

Nakhon Sri Thammarat company Chalearmyod Pattana started the project in January of this year. The company is hoping to complete construction within 120 days, or before the end of May.

In addition to the drainage system, Chalearmyod Pattana is also building the infrastructure for a state-of-the art restroom facility.

Once complete, a separate company will design, decorate and maintain the facility. Mr Weerawat hopes that it will become one of the “most beautiful” and hygienic restrooms in Phuket.

After the current phase of construction is completed, additional companies will be contracted to continue other parts of the makeover.

These are set to include a bike path, pavilions and landscaping, which will include introducing new floral species to the area.

Plans are also in the works to add a security gate and sufficient lighting for the dam at night.

Mr Weerawat also said there are plans to expand the capacity of the dam reservoir by 3.3 million cubic meters by adding an additional three meters in depth.

The construction schematics have been prepared, but Phuket Irrigation Department is still awaiting confirmation that the dam, now 30 years old, remains strong enough to support the addition.