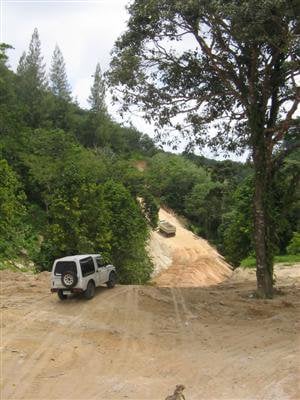 PHUKET CITY: Work on the new Patong-Chalong road could continue soon, despite the project not having Cabinet approval for a hilltop stretch which cuts through national forest land.

The road has long existed as a dirt pathway over the Nakkerd Hills, but its highest parts are only passable by all-terrain vehicles due to its sharp inclines, twisting turns and rough surface.

Phuket Governor Wichai Phraisa-ngop, who has made expanding the island’s road network a top priority, has ordered the Phuket Office of the Rural Roads Department [RRD] to move forward with the project.

The work involves widening, grading and surfacing the entire five-kilometer stretch from Chao Fa West Road in Chalong to Nanai Road in Patong.

Further east, the road rises steeply up the hillside and into National Forest land.

Despite the rough terrain, local residents have long used the road because it reduces the trip to Patong from 20 kilometers to only five.

The area is used mainly for growing rubber trees, but other activities include charcoal-making, off-road car rental and goat herding.

Despite concerns about the legality of the project, the RRD says it is prepared to continue the work, provided it is given written orders from the governor.

Nid Nilphan, who heads the RRD’s planning office in Phuket, said last week he was preparing the necessary documents for the governor to sign.

However, as of today, his office has yet to receive express written consent, so the project remains on hold.

Governor Wichai has applied for Cabinet permission to go ahead with the project and funding of 40 million baht has already been made available.

The project could be completed within six months, he said.

Mr Nid said he did not know if the Ministry of Natural Resources and Environment (MNRE) was opposed to the project.

“It is my duty to follow the governor’s orders, but I want to get them in writing first,” he said.

A source at Phuket Provincial Hall said the project would be good for Phuket and is set to move forward soon.

“This road has long been used by local villagers who grow rubber up there, even though it is illegal in parts designated as National Forest,” he said.

Ongard Thanacharnmongkhon, who heads the MNRE’s Phuket Office, said that although the road only occupied a small part of the total forest area, the project would open up large areas of adjacent land to encroachment.

Moving ahead with the project without formal permission would only reinforce the idea that people could get away with doing whatever they want, regardless of the consequences to the environment, he said.

The governor and the MNRE are already at odds over another road project which would destroy eight square kilometers of mangrove forest to create a new access road to Sapan Hin.

One couple living on the lower Klong Krata hillside portion of the Patong-Chalong road project said they saw vehicles heading up the hill at all hours of the day and night and suspect they may be involved in illegal activities such as logging.

Although improvements to the road will no doubt affect their way of life, the couple are in favor of it.

“The road will enable people to evacuate out of Patong if there is another tsunami or similar disaster,” said Mr Kasem.

No tsunami warning for Phuket