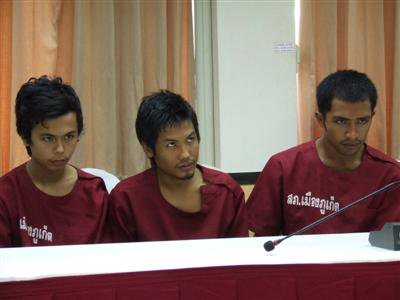 All three have been charged with conspiracy to commit premeditated murder. The attack was sparked out of anger when the victim revved his motorbike engine late at night, according to police.

Mr Sarayut said Mr Sathit was drunk ‘as usual’ when he arrived home, causing the three men to angrily confront him. A fight broke out, which ended with the fatal stabbing of the victim.

Mr Kanokchart confessed to police that he was the one who stabbed Mr Sathit, who died of a single wound to the heart.

Collected as evidence during the arrest was the dagger used as the murder weapon.