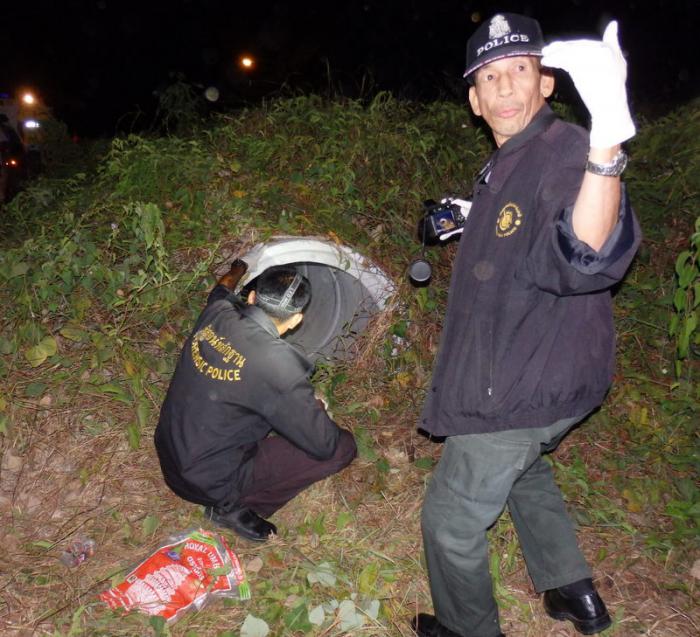 PHUKET: Police launched a murder investigation after the decomposed body of a woman was found yesterday by a medical worker who stopped by the side of the road to urinate.

Police believe the body is that of Kanya Yoongnoo, 47, who was reported missing in Cherng Talay in January, but are waiting for DNA test results.

Two Paklok Emergency Medical Technicians, Uthai Jitpetch, 37, and Suchart Komgnam, 45, had their suspicions aroused during their stop along the road in Paklok, about 5km from the Heroine’s Monument.

“We smelled something very bad. We looked around for the source, but couldn’t find anything. Then we had to leave to pick up a patient in Phuket Town,” Mr Uthai said.

The smell made such an impression on the two men that they returned in the evening to resume their investigation.

“While we were looking around, we saw something large in a drainpipe. From the size we figured it had to be a body, so we called the police,” Mr Uthai explained.

Forensic officers and Capt Narong Muangduang of the Thalang Police were summoned at about 7pm.

A crowd of locals gathered while officers extracted the body, which was wrapped in two large black plastic bags, one covering the top of the torso and one the bottom.

“We believe she had been dead over a month,” said Capt Narong.

Police checked missing persons reports and concluded that the woman could be Ms Kanya.

“We believe it is my mother,” Mr Somsak said. “We couldn’t make a physical identification, but the clothes look like hers.”

Mr Somsak said that the family had last seen Ms Kanya on January 21. At about 8pm that day she had told family members that she was going out, but did not say where or with whom.

“We looked for her ourselves until January 25, and then reported her missing to the police,” Mr Somsak said.

On February 16, Ms Kanya’s motorcycle was found in a pond in Baan Layan in Cherng Talay. The license plate was missing. Rescue divers searched the pond for a body, but did not recover one, Mr Somsak said.

“I believe this body is my mother’s, but deep down I still have a small hope that we will find her alive,” he said.

DNA testing is necessary to confirm the identity of the body, said Capt Narong.

“The body was so decomposed that we’re not sure of the cause of death, but the circumstances indicate it was not natural. While the DNA testing is going on, we will start a murder investigation,” he said.

Frenchman steals testosterone from Phuket pharmacy in his underpants