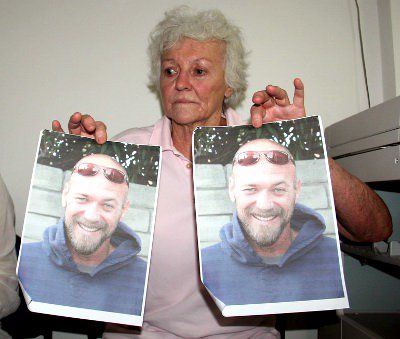 PHUKET: The mother of an American ski instructor, who was last seen in Phuket, has offered a 50,000-baht reward to find her son.

Speaking at Karon Police Station today, 69-year-old Lynne Bean appealed to the public for any information that would help find Brett Bean, her 43-year-old son who failed to make a flight home to Los Angeles on November 27.

Brett was last seen by a neighbor in Karon, on Phuket’s southwest coast, on November 25.

Brett is 6 foot 2 inches tall and has a tattoo on his right thigh and another on his left forearm.

He arrived in Phuket in April and was scheduled to fly from Phuket to Bangkok on November 27, and arrive in California shortly thereafter, said Ms Bean.

Brett works as a ski instructor in Colorado in the winter, but stays in Phuket to surf during the summer, she explained.

“I was waiting for him at Los Angeles Airport, but couldn’t see him. I went back to check with the airport on November 30, but we haven’t been able to find him,” she said.

Ms Bean explained that she received an email from Brett on November 26 clarifying his trip details.

“He told us to pick him up at the airport,” she said.

“We checked with Cathay Pacific Airways and were told that our son bought his ticket from the airlines, but he did not board the plane,” she explained.

Police are currently directing their efforts into finding Mr Bean’s motorbike, a black-and-gray 125cc Honda, which he was last seen riding on November 25.

“We are still tracking where the computer was last used. Mr Bean apparently used to take it to internet cafes and plug it into their networks to use the internet. We will be handing out flyers and checking internet cafes in the area,” Mr Bowman confirmed.

Karon Police Deputy Superintendent Sophon Borirak told the Gazette, “We have distributed among our officers the flyer showing a photo of Mr Bean and a description of his physical appearance.

“If we can establish where Mr Bean was last seen in public, we will try to use CCTV to track his movements to determine his last known whereabouts,” Lt Col Sophon added.

Maj Worapong Prom-in of the Chalong Police told the Gazette that officers found nothing untoward in the bungalow where Mr Bean was staying.

“Everything was in order. There were no signs of a struggle,” said Maj Worapong.

Mr Bean’s surfboard and passport were found in the bungalow, along with his driver’s license, motorbike registration book and his bankbook.

“Everything looked like Mr Bean had just stepped out,” Maj Worapong said.

Police are also looking into an ATM withdrawal reportedly made from Mr Bean’s account on December 5. However, investigators have asked the Gazette to refrain from publishing any details of the transaction.