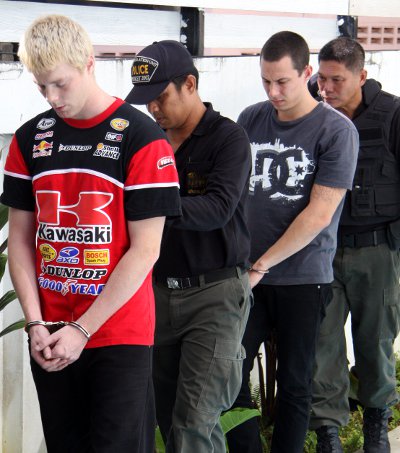 PHUKET: Swedish nationals Johan Sebastian Ljung and Tommy Viktor Soderlund, who have been charged with the stabbing murder of Maksim Schantz on August 1 last year, appeared at Phuket Provincial Court on Tuesday.

However, as multiple witnesses, necessary to the case, failed to present themselves at the court, the judge reconvened the trial for 9:30am on November 2.

Aeknara Luangsanam of the Public Prosecutor’s Office told the Phuket Gazette yesterday that he would be applying for subpoenas to bring in the witness for the next trial date.

In addition to witnesses not presenting themselves at the court on Tuesday, the court date was postponed to allow Mr Schantz’s mother, Yvonne Raissa Schantz, 52, more time to prepare her civil court case against the accused, Mr Aeknara said.

“Mrs Schantz is suing the accused for 24.5 million baht for financial compensation due to the emotional duress she has suffered from the loss of her son,” Mr Aeknara told the Gazette.

After the adjournment until November was handed down, Ljung and Soderlund, were immediately returned to the Phuket Provincial Prison, where they are being held, until the trial concludes.

The court has charged them with premeditated murder, collaboration in robbery and carrying a knife and an unlicensed firearm with ammunition.

They have denied all charges.

However, Ljung and Soderlund on August 2 last year confessed to police that they had attacked and stabbed Russian-born, Swedish national Mr Schantz, but claimed they did not intend to kill him.

The pair were allegedly angered that Mr Schantz informed police of a scam operation they had been running out of Pattaya.

Per Kageby, Senior Consular Officer at the Embassy of Sweden in Bangkok, told the Gazette in August last year that based on a prisoner-transfer agreement between Sweden and Thailand, the suspects would have the opportunity to serve out their sentences in Sweden if convicted in a Thai court.

According to the agreement, the pair would be required to serve one-third, or no more than eight years, of their sentence before having the opportunity to apply to the Swedish government for a transfer.

If the Swedish government accepts the transfer request, it would then be forwarded to the Thai government for approval, Mr Kageby said.

The case was first heard in court October 31. However, it was postponed to allow Soderlund and Ljung to find their own legal representative instead of the defense counsel provided by the Thai government.

The next court date was set for April 21, but unable to secure a Swedish translator for the trial, it was postponed again.

Mr Aeknara explained that In that time both men had learned to speak and read Thai.

“How long the case takes to finish will depend on the court,” Prosecutor Aeknara said.