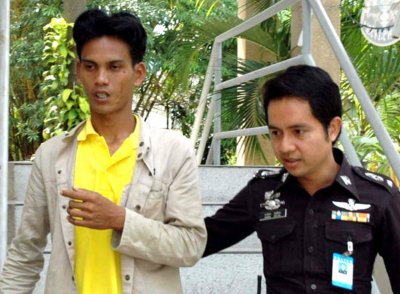 KATHU (Kom Chad Luek): Tung Tong Police are preparing to file charges of “deceiving the public” against a mah song (“spirit medium”) who pretended to skewer his tongue with a sword during this year’s vegetarian festival, but in fact ran the blade through a pig’s tongue that he had secretly concealed in his mouth to fool onlookers.

The incident was reported to Tung Tong Police Duty Inspector Pol Lt Col Passakorn Sontikul at 1:30 pm October 30 by the managing council of Kathu Chinese Shrine, generally accepted to be the shrine where the now-famous Vegetarian Festival began more than a century ago.

The shrine’s council members said they had detained one of their mah song after he confessed to the fraud.

Arriving at the scene, police found the man being beaten by an angry mob. They stopped the fracas and took the man to Tung Tong Police Station for questioning.

He was identified as Paitoon Khopwej, 27, a woodcarver from Chalong Village 10.

Paitoon told police that he had been a mah song for five years, formerly at a different shrine. Having seen the impressive displays of ritual self-mutilation by other shrines in this year’s street processions, he wanted to do something new and impressive for the Kathu Shrine’s procession on the morning of October 29.

He told police he wanted to impress the crowds by skewering his tongue bottom-to-top with both a long, pointed sword and a sharp-tipped saw blade – but that he was too afraid of the pain.

Waking up early the morning of the parade, Paitoon went to the market, where he cut the tongue out of a pig’s head, washed it and put it into his own mouth, pretending it was his own in the street procession, during which he skewered it as planned.

Paitoon told police that no one suspected anything until the following morning, when a group of “senior” mah song came by his quarters near the shrine to inspect his wounds.

Amazed to find none, they began to press him for an explanation. Failing one, he admitted what he had done.

The other mah song reported him to the shrine council, which convened an emergency meeting to discuss the matter. It was decided to expel Paitoon from the shrine and report him to the police to be charged with “deceiving the public”.

But before the police arrived, a crowd of angry villagers who heard about the affair arrived and began beating up Paitoon.

The head of the Kathu Shrine asked police to prosecute Paitoon to the full extent of the law in order to set an example for other mah song.

Such behavior is unacceptable, could threaten the festival’s integrity and cause a downturn in tourism, he said.

Col Passakorn said Tung Tong Police said the incident was unprecedented and that charges would be filed with Phuket Provincial Court.

However, the exact charges were not specified.