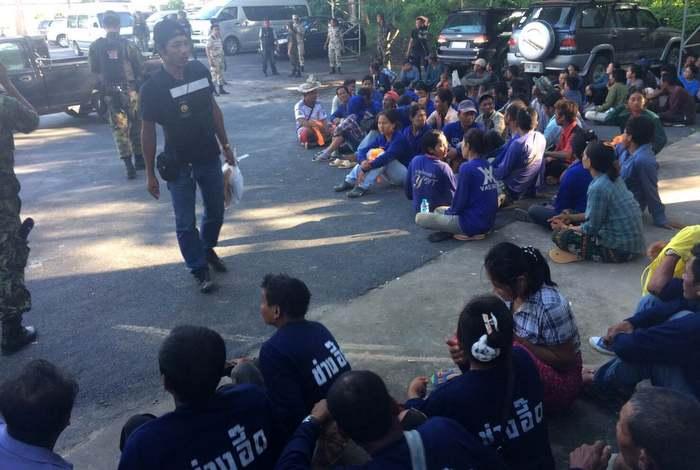 PHUKET: Officers from the Phuket Provincial Office (PPO) and the Royal Thai Navy arrested 80 migrant laborers during two raids in Thalang on Sunday.

The raids came after the Phuket Provincial Employment Office (PPEO) encouraged illegal laborers to register throughout the month of July, with PPEO officials stating that the government is showing leniency with employers and illegal workers (story here).

Officers raided a National Housing Authority construction site around 2pm, after reportedly receiving a complaint of illegally-registered migrants working there.

“There were more than 70 workers at the site in Srisoonthorn, both Thai and migrant men and women, working under four employers,” said Wansurachart Detaran of the PPEO.

“Some of them ran away, and some stayed back to be checked.”

“Most of them had passports, but no work permits,” Mr Wansurachart said.

“Some had permission to work in the fishing industry, but were working in construction instead.”

The second site raided was an under-construction housing development in Soi Baan Taiteen off Thepkasattri Road.

Officers said that they found more than 30 migrant workers at the site.

After checking their documents, officers found migrants also working without a work permit or working in a different field than permitted.

He also said that the officers had to raid the sites because complaints were filed to officials.