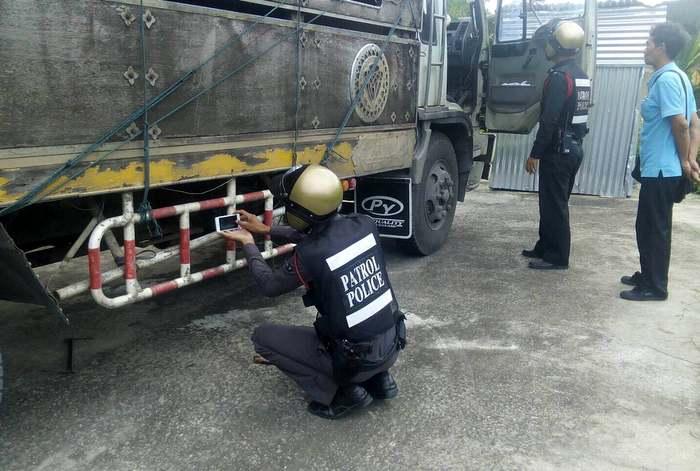 PHUKET: Thalang police are looking for a suspect or suspects who allegedly stole the batteries from a parked six-wheel truck in Srisoonthorn yesterday.

Lt Suporn Muangkhai of Thalang police said officers were notified of the theft by the truck driver around 7:30am.

“I left HomePro shopping center in Thalang on Sunday evening after work to park there,” Mr Pipop said.

“I’ve been parking the vehicle here since July 11, since working in Phuket, without any problems until last night.”

“The vehicle belongs to Furniture Group. I woke up this morning and furniture staff and I went to start the engine to continue our work,” he continued.

“The vehicle wouldn’t start, so we checked and found that two of our batteries had been stolen,” he explained.

“We couldn’t do anything but buy new batteries, which cost us about 5,800 baht for both, and now I’m in trouble with my bosses,” Mr Pipop added.

Police said they believe the perpetrators have a decent knowledge of automotive mechanics, but were unsure how many were involved.

“We’re checking CCTV in the area and nearby,” said Lt Suporn.

Srisoonthorn residents complained to police that they’ve been plagued by a rash of thefts recently, both of vehicles and of items taken from inside their homes.

“We would like to urge police officers to patrol more often, to at least scare the thieves so they know the area is under watch by police,” said a resident who declined to be named.

“The thieves are not scared of robbing us, but hopefully we could at least scare them that they may be caught.”