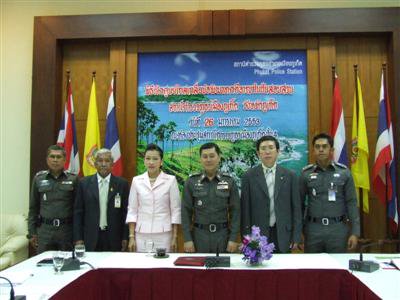 PHUKET CITY: A new mediation center located inside Phuket City Police Station could reduce the number of cases in the provincial judicial system by up to 30%, police say.

Also present was Phuket Provincial Court Chief Justice Varangkana Sucharitakul, a well-known proponent of mediation who will take up a new post in the appellate court system in Bangkok in April, after serving a year in Phuket.

Two new mediation rooms will provide people with a space in which to settle disputes by civilized discussion, rather than costly litigation.

Complainants in disputes for which mediation is possible – known as ‘compoundable offenses’ in legalese – will be encouraged to choose mediation over prosecution.

More serious ‘non-compoundable’ crimes, such as acts of violence or crimes against the state, cannot be settled by mediation.

The Phuket Provincial Court’s team of 38 mediators will help negotiate between disputing parties.

The mediators, all trusted community members, include police officers, local leaders and businesspeople.

In 2009, the mediation center at Phuket Provincial Court successfully mediated 90.6% of civil cases and 72.3% of criminal cases entered into the system. By offering mediation services right inside the police station, the court hopes to settle disputes before they enter the court system at all.

The center at the police station has been open for one month, although it has yet to process any cases.

Court officials and mediators are currently setting up the organizational framework and working with police to ensure efficiency in selecting cases amenable to mediated settlement.

Col Wanchai said the center would relieve pressure on the overburdened justice system, saving time and money in the process.

“It will keep relations between parties on good terms and keep people happy,” he said.

Once in operation, the center is expected to reduce the number of cases processed by the police and related organizations, including the Provincial Prosecutor’s Office, by 10% to 30%, he said.

It will open from 8am to 8pm daily.