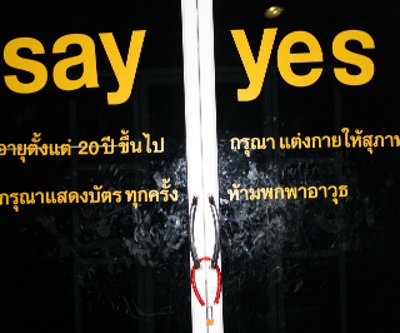 PHUKET: A man was shot to death outside a bar in Chalong early this morning. Police believe the shooter to be a man he argued with at another bar earlier the same evening.

Superintendent Wichit Intorrason led Lt Col Anukul Nuket and other Chalong Police officers to the ‘Say Yes’ pub on Patak Rd at about 4:30am today after receiving a report that a man had been murdered outside the venue.

They arrived to find the body of Wichit Wong-oon, 28, lying on the road in front of the pub.

He was shot once in the back with what police believe to have been a homemade shotgun.

His face was also badly bruised, as if beaten, police said.

Mr Wichit, a construction laborer working on a project on Soi Palai, arrived at ‘Say Yes’ with five friends.

The group had been kicked out of the ‘Sarapan Pleng’ bar earlier in the night for arguing with other patrons.

Just before ‘Say Yes’ closed, Mr Wichit went out in front of the pub to have a cigarette.

He was shot in the back while trying to run away from his assailant, police said.

Kusoldharm Foundation workers took Mr Wichit’s body to Vachira Phuket Hospital for examination and storage until a relative in his native Phayao province claim it.

Police are searching for his killer.