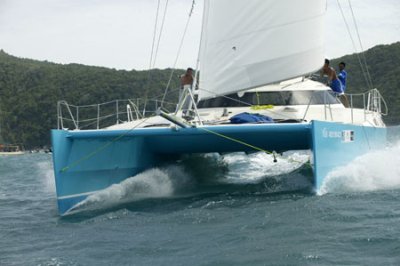 ANDAMAN & NICOBAR ISLANDS: Four months ago, Kilo, a 46-foot catamaran drifted off its anchorage in Phuket and ended up in the Andaman & Nicobar Islands.

Today, after three months of wrangling with officials, the yacht’s owners, Chris Sieber and his wife Surapa Srijutanat, finally set sail from Port Blair in the Andamans, bringing Kilo back to Phuket.

The yacht went missing from Kata Beach on December 17 and was recovered on January 20 off the Andaman and Nicobar Islands, some 725 kilometers away.

Since then, the yacht has been locked in bureaucracy. K. Surapa explained to the Gazette in January that the Port Blair authorities had contacted her to say that the couple would have to pay a US$56,000 (about 2.1 million baht) fee for the Indian Coast Guard towing the yacht from its landfall to the islands’ administrative center, Port Blair.

In the end, it appears they paid next to nothing. Bob Mott, a close friend who has been in constant contact with the Siebers throughout the bureaucratic ordeal, said this afternoon, “They were cleared days ago by the Indian Navy, Customs, Immigration and the Coast Guard. They would have found out from the Harbor Master that they were clear to leave this morning.

The battle over the huge fee to recover Kilo became so intense that Phuket Governor Udomsak Uswarangkura promised in January to contact the Thai Ministry of Foreign Affairs to get in touch with the Indian Ambassador to Thailand to help clear the way.

It had the right effect. Mr Mott was full of praise for the Thai officials involved. “I am amazed they got this to happen. I know the Thai consul in Calcutta [Kolkata] has been involved. I think without them it wouldn’t have happened,” he said.

He explained that the return journey is expected to take about three days. “Kilo is fueled up and has 80 liters of extra fuel in containers. She has water aboard, the rudder problems are fixed, and the engine is running fine after the tanks were flushed of the gasoline that was mistakenly put into the diesel system,” he said.

Mr Mott added, “I asked Chris, ‘Are you going to have a party when you get back?’ and he answered, ‘You bet!'”