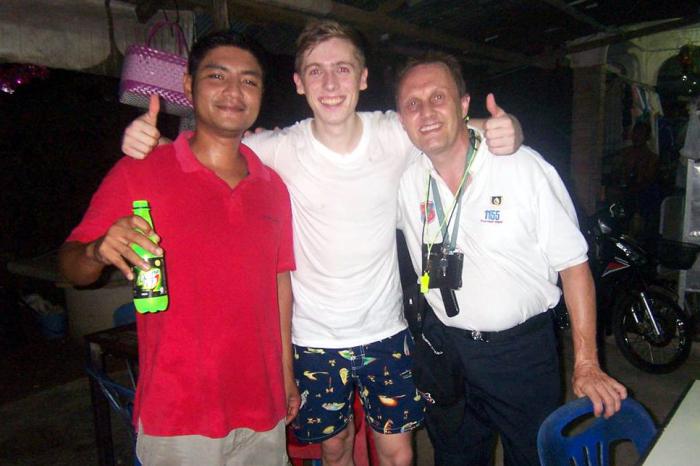 PHUKET: A hastily formed search instigated by an expat Phuket Tourist Police Volunteer led to the safe recovery of 25-year-old French tourist Erik Pourier, who became lost in the jungle at the Khao Phra Thaew wildlife sanctuary in Thalang in the dark.

On his first trip to Phuket, Mr Pourier had rented a motorbike to explore the island, and decided to visit the Bang Pae Waterfall late Wednesday afternoon.

Leaving his motorbike by the park entrance, he hiked alone along the trail for about 40 minutes, until he realized that it was too late in the day to reach the waterfall during daylight. Mr Pourier turned back, but darkness quickly fell and he became disoriented as to which direction to walk.

“Luckily, Erik had his mobile phone and although the network coverage was patchy, he was able to call the only number stored on his new Thai SIM card – that of the 24/7 Airport Hotel, where he was staying,” long-standing Phuket Tourist Police Volunteer Simon Luttrell told the Phuket Gazette.

“His luck continued – I actually answered his call as I live at the hotel, which is owned by my Thai family.”

By the time Mr Pourier made contact, although uninjured, he was becoming increasingly concerned about his situation.

“I told him to remain calm and to remain where he was,” said Mr Luttrell, who drove quickly to the wildlife reserve and alerted the park rangers.

“Myself and a local man, Mr Ken, who knows the park very well, scrambled for about 30 minutes up the hill. From time to time, I was able to contact Erik by telephone and reassure him that rescue was on the way,” Mr Luttrell told the Gazette.

The two rescuers were soon within shouting range and shortly afterward Mr Pourier was found safe and well. “Apart from a few cuts and scratches where he had fallen on the slippery path in the darkness,” said Mr Luttrell.

All three made their way slowly down to the park restaurant, where , a very-relieved-to-be-rescued Mr Pourier rehydrated with the cool drinks available.

“This is one holiday experience I will not forget,” he laughed.

Mr Luttrell credited the speed of the rescue to Mr Ken, whose local knowledge of the park was vital in finding Mr Pourier.

“If you are going to walk in the park, please bear in mind that darkness falls around 6:30pm,” Mr Luttrell advised.

“Do not try to walk to the waterfall in the late afternoon because you will not have enough time to return in daylight. Once darkness falls, it is pitch black in the jungle, and without a flashlight you simply cannot walk a few steps,” he said.

Any foreigners who find themselves in distress are urged to call the Tourist Police Volunteer 24-hour hotline: 1155.