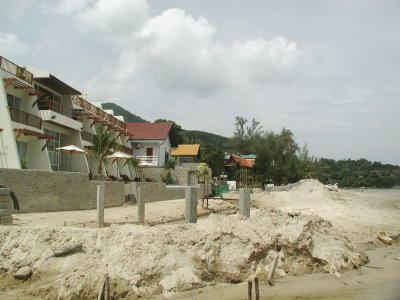 KAMALA: The losses hotels have suffered from tourists canceling bookings after seeing the rebuilding work on Kamala Beach are just a sacrifice they have to make, Wanchai Ruang-udom, the landscaping coordinator hired to complete the Tourism Authority of Thailand (TAT) Kamala beautification project, told the Gazette yesterday.

“This is a sacrifice they have to make. This project was approved by Kamala beach operators at a public hearing. They understood that after the tsunami something had to be done, that it’s better than leaving the mess on the beach,” he said.

“We planned to start this project last October, but because it was the start of the high season we just beautified the public park.

“And now it’s the end of the high season, when there are less tourists, we have started digging holes in the sand to make the beachfront walkway. If we wait any longer it will be the rainy season, which will make it very difficult for the contractor to work,” K. Wanchai explained.

“Every time I’ve been to Kamala, I have explained to people there that the TAT knows that it’s difficult for everybody, especially for the beach chair operators, but we have to do it. They have to consider the final result, which will be good for them in the future,” he said.

Kwanjai Samani, Executive Assistant Manager of the Layalina Hotel, told the Gazette that the hotel has suffered cancellations since the TAT project began. “Guests who booked their rooms through our website canceled when they arrived because they were shocked by what they saw.

“Some said they would sue us because the website showed a very nice hotel close to the beach without this project in front of it.

“We complained to the TAT, and asked them to make sure the project ends exactly on schedule, because it’s not only our hotel [that is suffering],” she said.

The post-tsunami rebuilding started on December 30 last year, and includes a beachfront footpath, public park, tsunami evacuation routes and public restrooms. “The project is 70% complete, and we are currently landscaping the public park and making the evacuation routes,” K. Wanchai said.

He explained that large holes have been dug along Kamala Beach for steel supports for the beachfront walkway, and that these will be backfilled when the project is complete.

“We are trying to complete the project as quickly as possible. Now it looks a little messy, but it will be nice and safe when it is finished,” K. Wanchai said.

“Tomorrow I will go again to check the construction, and I will try to make the people there understand, including the hotel operators. I promise to urge the contractor to finish on schedule by the end of May,” he added.

Walter Plangenauer, Managing Director of the Layalina resort, said, “It’s necessary, but it should not be done during the high season. Anyway, the job is now in progress and we were told it will be finished in May. We are looking forward to that.

“I think it’s affecting everybody – all the hotels and all the people who rent out houses. It would be good if the TAT tried to organize the manpower and the proper machinery to finish the job quickly – that would be a good solution,” he said.

Meanwhile, Jaral Sararak, President of Kamala Tambon Administration Organization (OrBorTor), said that the concrete walls reinforcing the banks of Klong Pakbang are also due to be finished by the end of May.

“Now, all that requires reinforcing is the banks close to the Kamala Beach Inn, but we are waiting for the tourists to return home. The hotel requested that; they don’t want us to build it before the end of the high season,” he said.