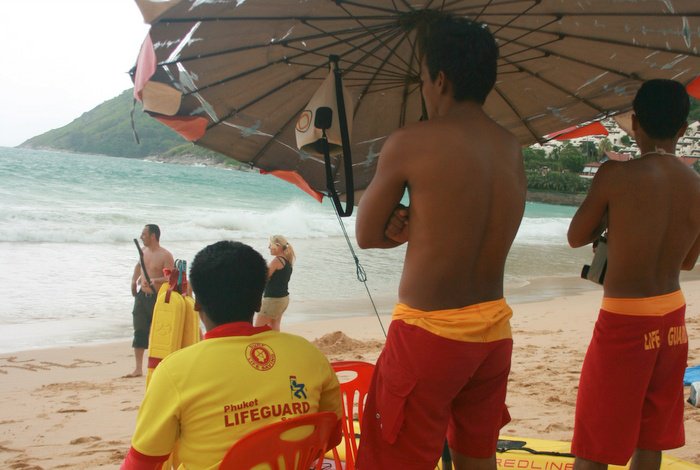 PHUKET: After almost two months and a number of deaths at Phuket’s beaches, lifeguards will resume their posts tomorrow.

Guards left the sands at sunset on March 26 and returned their equipment to the Phuket Provincial Administration Organization, following what has become an annual contract debacle.

At that point no company, including the Phuket Lifeguard Club (PLC) had stepped forward to bid on the 22-million baht government concession.

The island’s beaches faced a similar conundrum last year (story here) and went unguarded for a month, after the PLC walked off due to issues concerning the details of the contract (story here).

They eventually returned to the sands after agreeing to sign a 10-month contract (story here).

This year’s 10-month contract was signed last Friday (story here). The sticking point this year was the 2.2mn baht required to be held in deposits in order to bid for the contract, explained PLC President Prathaiyut Chuayuan.

The contract is set to expire in 2016 at about the same time as the annual southwest monsoon season starts in Phuket, bringing dangerously large waves and deadly rip currents to many of the island’s most popular west-coast beaches.

The reoccurring safety issue of the island’s beaches being void of essential life-saving services sparked an open letter to the National Council of Peace and Order (NCPO) by the family of 20-year-old Panya Lonraphat, who drowned at Nai Harn Beach earlier this month (story here).

“While politicians and suppliers continue to wrangle over a budget for lifeguards at Phuket beaches, another tragic drowning took a life at Phuket’s world-class Nai Harn beach. He was visiting Phuket to celebrate the recent birth of his niece,” said Mr Panya’s brother-in-law, Jacob Ritter.

Though the PLC had already agreed to a new contract before the death of Mr Panya, guards had not yet returned to the beach, as the contract was awaiting final approval.

“I am very glad that we are going back to work,” said Mr Prathaiyut today. “We will be on the beaches from 8:30am to 6:30pm everyday.”

The new contract is for 83 lifeguards and nine chief lifeguards to be posted at 38 different stations on the island.

“Tourist and locals should only swim in areas designated as safe by lifeguards while we are on duty. Please do not swim at night or in areas where we can’t do our best to keep you safe,” Mr Prathaiyut said.