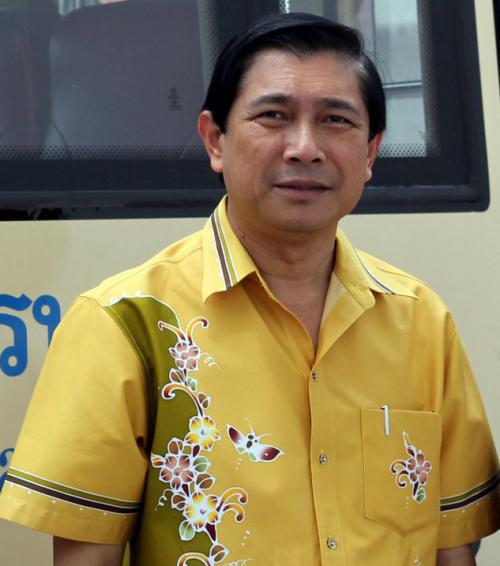 Maitri Inthusut arrived on the island to take up the position of Governor of Phuket on October 8, 2012. With a master’s degree in political science from Thammasat University, he joined the National Security Council, rising to the position of NSC Secretary-General, before taking up the position of Chief Secretary for the Secretariat of the Cabinet. He has also served as Governor for the provinces of Trang and Phayao.

Here, he describes how he is tackling Phuket’s problems.

PHUKET: I was recently accused of sweeping problems under the carpet. The best way to counter such allegations is to present the positive steps I’ve taken to address problems in Phuket.

Like any other tourist destination, Phuket has problems – I know that. I just don’t think it would be useful to broadcast the fact. Imagine if a governor was oversensitive to these dangers and made unfair proclamations such as, “Hey everyone, this place is too dangerous, tourists shouldn’t come!”

I know what the problems are and I’m doing my best to address them. But I have to do this in my own way. It’s hard to satisfy everyone. However, I’ve found over the years that once people get to know me and understand my methods, they come to like me.

The way I see it, we need to have two approaches – one is to prevent problems from happening, and the other is to solve them when they do happen.

Our emphasis is on prevention, and for this we rely on the police a great deal. As you may know, the number of police officers on Phuket is not in reasonable proportion to the number of people they need to protect. Nonetheless, they are doing their best.

Recently, we asked them to make more frequent checks at motorbike taxi, tuk-tuk and taxi stations to make sure those drivers are polite, and providing customers a fair price.

We also rely on the police to do regular patrols in areas where we’ve experienced more crime. We’ve instituted 27 safety zones across the island to help us ensure public safety.

Another safety issue we are facing is tourist drownings. Lifeguards are working hard to save people’s lives, but more needs to be done. We are working on adding a lifeguard station to Koh Racha Yai (story here), as a number of deaths have occurred there within the past few months.

The last thing that needs to be addressed is education. We’ve worked on providing important information to both Thai and foreign business owners – we brought jet-ski operators together to tell them what standards of behavior we expect from them, and we brought foreign operators together to help them understand Thai labor laws. When people know the law and what is expected of them, it helps them to act in a legal manner.

These are some of the steps we’ve taken to prevent problems. But problems will occur no matter what we do, so we have to be prepared for that too.

I have an agreement with Phuket Provincial Police Commander Ong-art Phiwruangnont – whenever we have a tourist victim, we both step in to help out immediately.

We want police and hospital workers – first responders – to help visitors in the best way they can. I go out myself and visit police stations and hospitals to see what’s going on and find out what plans they have to provide for visitors in need.

Patong Hospital takes care of a lot of patients, both Thai and foreign. In the high season, they have even more. Hospitals coordinate with each other to provide better service. A medical team from Vachira Hospital stands by to support Patong Hospital. Patong itself provides a total of four emergency medical services vehicles to stand by at Kamala and Karon Municipality in case patients need to be transferred to Patong Hospital.

There are other problems we’re dealing with too, step by step. The problems are interconnected and can’t be fixed in a short time period. We have to be persistent and patient.