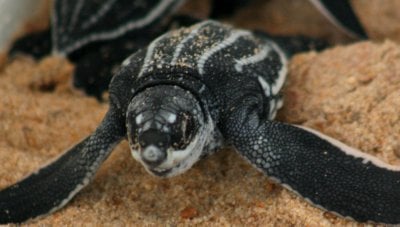 KARON: Seventy-six leatherback turtles have hatched so far out of the 103 eggs laid on Karon Beach in December.

Before December, leatherbacks had not laid eggs on Karon Beach for more than 10 years. If the turtles are lucky at least 1% of the hatchlings will survive to adulthood and return to lay eggs.

“About 80% of the eggs from the nest will hatch and we release the turtles at Karon Beach, where the eggs were laid, the same day that they hatch. The turtles will remember where they were released and will come back to lay eggs at Karon Beach again, if they survive,” K. Sontaya said.

The turtles must be released in the evening at sunset so they will follow the setting sun into the sea, he added.

“The chance that these turtles will survive and come back to lay eggs here is small because after they go into sea they might be eaten by another animal, but that is the cycle of life for leatherback turtles.

“We try to care for them after they hatch but we haven’t had success with this type of turtle. They will die if we don’t release them into the sea,” K. Sontaya said.

He added that leatherback turtle eggs take about 60 days to hatch and that a leatherback has to be about 15 to 20 years old before it is able to reproduce.

The PMBC will continue to watch over the remaining 27 eggs and see how many eggs produce live offspring.

Woman gunned down in Kamala