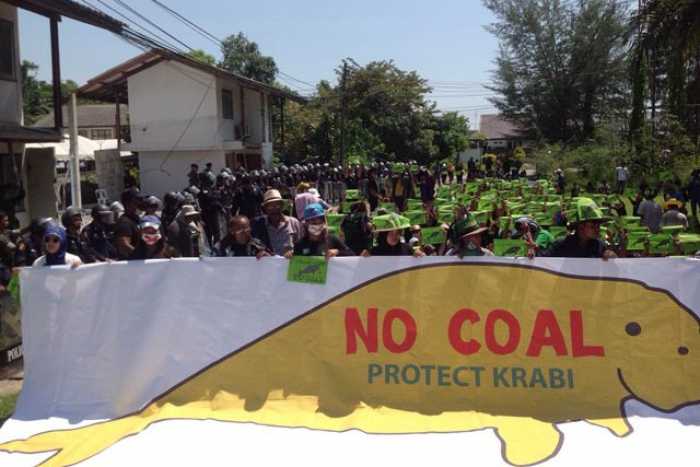 PHUKET: The Koh Lanta Tourism Association has lashed out against a coal-fired power plant slated for Krabi province, east of Phuket, claiming that the authority initiating the project has been dishonest with locals.

“The Electricity Generating Authority of Thailand (EGAT) held a third public hearing at Ban Klong Ruo, Nua Klong district, on Sunday. We believe it was insincere, as many of the people at the meeting were strangers, not locals,” said Therapot Kasirawat, chairman of the Koh Lanta Tourism Association.

Mr Therapot also asserted that a huge brigade of military personnel present at the meeting intimidated locals from attending.

“EGAT called for a few hundred guards from the military and the police to control protesters. I think they were trying to intimidate the locals,” he said.

“EGAT did not want the meeting to be stopped. They don’t care about what it takes, they just want the public hearings to be completed.

“I urge the government to halt this project until EGAT starts being honest with the locals about it.”

The project, which would see an 870-megawatt coal-fired power plant built in Krabi’s Nua Khlong district and a coal seaport established at Ban Klong Ruo, has long been protested by Krabi villagers.

In February last year, protesters in green t-shirts gathered at Krabi Provincial Hall and carried placards saying “Coal is killing us” and “Our ancestors built up this land, but coal is ruining it” (story here).

Then in March of this year, locals protested again, claiming that the planned project would cause pollution and damage eco-tourism industries which generate billions of baht each year for local people (story here).

“The coal plant will definitely affect tourism. It would not only harm Krabi province, but also other Andaman provinces, as they are all connected,” said Mr Therapot.

Mr Therapot called on EGAT to sign a Memorandum of Understanding (MoU) and promise to take responsibility for any damages the project has on local people.

“We believe that if the coal plant is built here, EGAT will refuse to take responsibility for losses and deny compensation to the locals, just like they did with the coal plant they built in Mae Moh district in Lampang province,” he explained.

“If EGAT really wants to be honest, they must sign an MoU and take responsibility for any damages.”

The Koh Lanta Tourist Association was not the only group to speak out against the project. Following the Sunday public hearing, the Stop Global Warming Association (SGWA) and 45 Krabi residents filed a complaint with the Central Administrative Court asking that EGAT drop its plan to construct the coal seaport, reported The Nation (story here).

Phuket’s Patong tunnel project balloons past B10bn, to include flyover