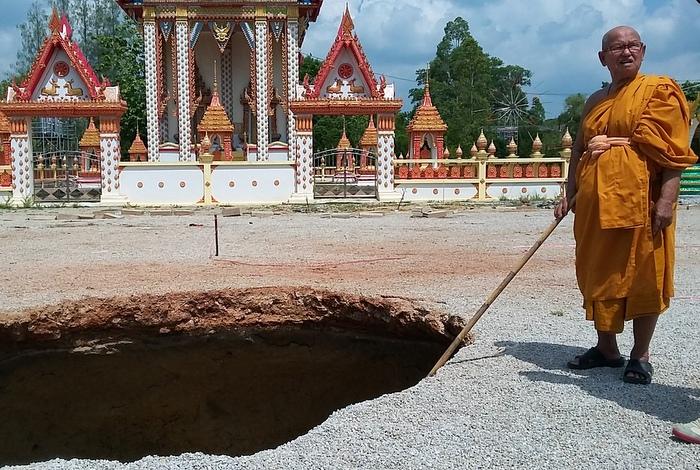 KRABI: The sudden appearance of a four-meter-deep sinkhole in the grounds of a temple in Krabi has some locals claiming the hole was made by a Naga – a mythical three-headed snake-like creature.

The hole in the ground appeared at Khao Phanom temple and almost swallowed up the temple’s abbot as he was sweeping the temple grounds.

“I was clearing things in front of the temple hall, when I heard what sounded like a bomb exploding,” said abbot Phra Kru Pipat Phanomkit. “Water splashed me. I was shocked and ran away.”

Measuring five meters wide and four meters deep, the muddy water hole opened up on the 70-year-old abbot on March 23. It is the second such hole to open up at the temple, with a previous, smaller hole, capped with a concrete column and a statue of a three-headed Naga placed on top.

“When everything was stable, I walked over to take a look inside the big hole, asking others to do the same,” said the abbot.

A similar event last year prompted a Surin chief to conduct a ceremony for spirits in Thalang (story here).

“Not long before the incident, a local said that there was a child dressed in white saying there will be another hole soon because it was the way of Naga in Krabi,” said the abbot. “Then this new hole actually opened up.”

The village headman has already contacted the relevant officers to find out exactly what happened. The area around the hole has been cordoned off to prevent people from falling in.