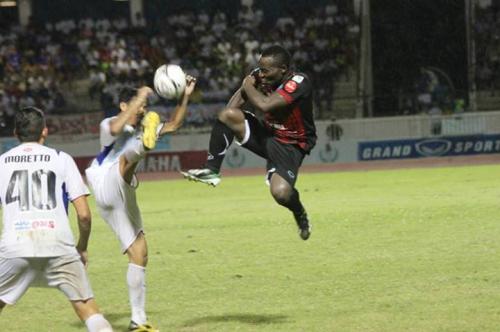 PHUKET: Thanks to Krabi FC’s 4-2 away win last night at Saraburi, Phuket FC moved up one place of the 18-team Yamaha League One (YL1), into 6th place, despite only drawing with lowly Royal Thai Navy FC 1-1 in Chonburi, also last night.

The midweek match-up, both side’s 22nd of the scheduled 34 matches in the YL1 2013 season, was played under overcast skies at Navy’s 12,500-seat stadium in Sattahip, along the Eastern Seaboard.

It was clear from the kick-off that the Islanders were aiming for three points, with Coach Teco fielding Brazilian stalwart, Cristian Alex alongside the “Cameroonian Bulldog” Ludovick Takam in the starting lineup.

However, following a goalless first half, it was the home side’s Malian forward, Souleymane Coulibaly who opened the scoring 10 minutes into the second half.

Phuket FC continued to dominate possession and had all the attacking play, and with Giorgi replacing Cristian pushed for the equalizer.

Phuket were denied at least two scoring opportunities by the lineman’s flag, however, a fine header by Ludovick Takam in the 68th minute injected instant adrenaline into the dozens of visitor fans who’d made the long trip.

Phuket’s drive for a winner was hindered 10 minutes later after the side was reduced to 10 men when Watchara Kriaram picked up his second yellow of the match, and despite five minutes of injury time given, both sides would have to be content with a single point.

Navy remain in 16th place with 20 points, while 6th place Phuket narrowed their deficit from 3rd place promotion honors to only seven points.

Meanwhile up in Saraburi, the Krabi FC Andaman Eagles were on fire, taking a 3-2 lead in the first half, with Krabi goals scored by Brazilian striker Valci Junior (8 minutes), Aitipol Kaewkhiew (25m) and Cameroonian forward, John Marry (34m); Saraburi’s Yutthana Jongnok scored on 25 minutes and their Ivorian forward Doumbia Cedric netted his side back into contention in the final minute of injury time.

However, a 70th minute goal – the only one in the 2nd half – by Thai midfielder Anuwat Phomsakun sealed the match for Krabi.

The win gave the Eagles 28 points, and a bump up to 10th place, while Saraburi with 32 points, were bumped down into 7th place by Phuket, whose draw with Navy gave them the edge by one point.

Another upset from last night’s YL1 fixtures was Trat FC delivering PTT Rayong their first defeat of the season (2-1) at Rayong’s PTT Stadium, which was immediately followed by the resignation of PTT coach, Noppaporn Ecksatra.

Apparently he was aiming for an undefeated campaign.

All YL1 results last night are as follows:

Phuket FC now head to Isarn, to take on 14th place Khon Kaen on Saturday. Their next home match is on Wednesday, August 21 against Airforce.

Krabi will play 9th placed BBCU in Bangkok this Saturday, and return to their home ground to play 13th place Si Racha the following Wednesday.