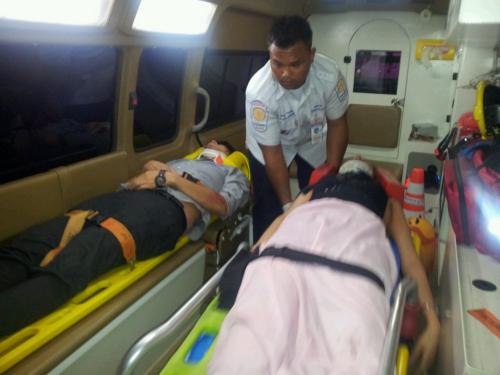 PHUKET: A Phuket nurse is in the intensive care unit at Bangkok Hospital Phuket this morning after the car she was driving hit a power pole at high speed before dawn today.

“When we arrived, three people were still trapped in the car: Kusoldharm rescue workers spent 10 minutes cutting them out of the vehicle before rushing them to hospital,” he told the Phuket Gazette this morning.

“Witnesses said they saw the car being driven at high speed toward the bypass road. Apparently the driver lost control of the vehicle on the curve, and the car hit hit the power pole,” Col Yotsapat said.

Staff at Vachira Hospital told the Gazette Mr Rithachai is scheduled to undergo surgery, but declined to give further details.

Staff at Bangkok Hospital Phuket confirmed that Mr Thanakorn and Ms Kanlaya were both in intensive care there, but also declined to give details.