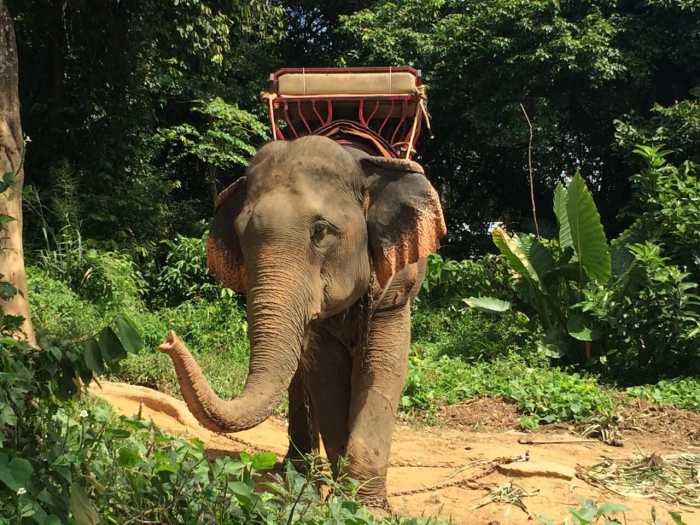 PHUKET: Two bull elephants who killed their trainers in musth-induced fits of rage this past week will return to providing jungle trekking tours to tourists after the musth period has passed, the Phuket Gazette was told (story here).

Wittawat Salangam, 22, was killed at the Phuchada Safari camp in Rawai on Tuesday when he went to unchain the 23-year-old bull elephant Plai Por (story here).

Plai Por used his trunk to batter Mr Wittawat, before attempting to gore him and eventually crushing him to death against a tree.

In Phang Nga, 18-year-old bull elephant Plai Meaw trampled his handler Suk Sapmak, 60, to death at the Phuwara Tour jungle-trekking camp last Sunday. He then ran into the jungle with two Russian tourists on his back.

Plai Meaw was finally subdued with tranquilizer darts and the Russian mother and daughter were safely recovered from his back about three kilometers from the camp.

In an obvious state of distress, the Russian mother declined to speak to the Gazette reporter at the scene.

Waraporn Kasetkala, manager of Phuwara Tour, expressed her sorrow over the incident.

“We are very sorry for their [Mr Suk’s family] loss and we will do what we can to help them during this time,” she said.

“He is normally playful and kind. This is why we believe he must have been in musth. He will be kept under observation and will not go on any treks until we know that it is safe for him to be around tourists,” said Ms Waraporn.

Musth is a periodic condition in bull elephants characterized by highly aggressive behavior and accompanied by a large rise in reproductive hormones.

Phuchada Safari staff declined to comment to the Gazette about the death of Mr Wittwat, though case investigator Lt Chollada Chokdeesrijun of the Chalong Police confirmed that his team will not be pursuing criminal charges.

However, the family of Mr Wittawat may yet file a civil suit, Lt Chollada said.

“We are still investigating what caused Mr Wittawat to approach the elephant, which led to his death,” he said. “We are also checking whether or not the elephant is legal.”

Lt Chollada explained that Plai Por was chained Monday afternoon after showings signs of entering musth over the weekend and giving tourists rides that morning.

“Mr Wittawat went to unchain the animal so that it could return to giving rides on Tuesday. That was when Plai Por went into a fit of rage and killed him,” Lt Chollada said.

“If Mr Wittawat was ordered to unchain Plai Por, then the owner must take responsibility for paying for Mr Wittawat’s funeral and compensating his family.”

Police have ordered all elephant camps in Phuket to ensure that any elephants entering musth are chained up and prevented from working as jungle-trek elephants until the period of musth has passed.

“We ordered the camp to keep Plai Por – and any other elephants entering musth – restrained,” said Chalong Superintendent Kritapas Dazintharasorn.

“This is all we can do for now. Musth is a natural phenomenon for male elephants, but we will consult the Livestock Office to learn what is the most appropriate action to take regarding this.”

Phuket Livestock Office Chief Weerasit Putthipairoj told the Gazette on Wednesday that his office had no plans to introduce any extra safety measures to prevent musth-enraged elephant incidents.

“We have no authority to arrest elephant camp owners or their staff for letting elephants in musth work. It is up to the police to press charges,” he said.

“We can only inspect elephant camps and check that the owners have all the required legal documentation for the elephants at their camps.”

Col Kritapas confirmed to the Gazette that Plai Por is expected to – and permitted to – return to work carrying tourists after his current period of musth has passed.

However, the chief of the Phang Nga Livestock Office, Thanawat Phansanit, has called all elephant camp operators to make sure they are aware of – and follow – regulations to ensure the safety of elephant handlers and tourists.

“I have also ordered the owner of Phuwara Tour to keep Plai Meaw chained up until he is no longer in musth. Also, a warning sign saying ‘Danger, No entry’ has been posted where Plai Meaw is being kept,” Mr Thanawat said.

Since Plai Meaw’s lethal rage last Sunday, Phang Nga Livestock officials have ordered that two other elephants no longer provide jungle tours, as they have been identified as entering musth, Mr Thanawat added.

“I have ordered every elephant camp to make sure that no elephants in musth are working,” he said.

“Tourists’ safety is our first priority. If any camps are found using elephants in musth, we have the authority to revoke their business permits,” Mr Thanawat said.