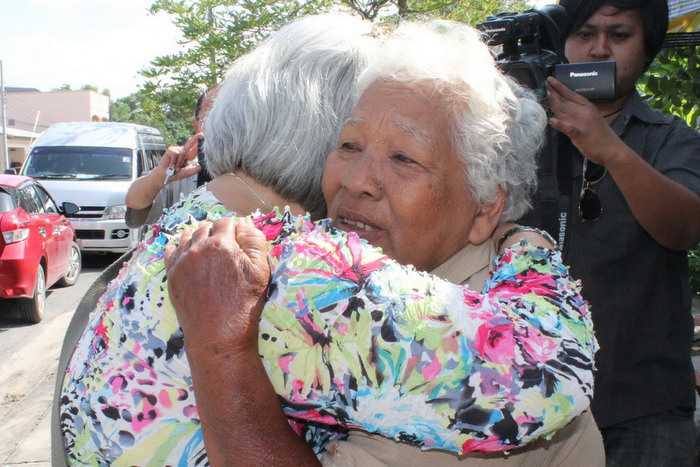 PHUKET: A British national, born to an Aussie mining-site manager and a Thai woman in 1960 and then given up for adoption six months later, was reunited with her birth mother in Phuket after 54 years apart.

Kimberley Ferreira, 54, was able to hold her 79-year-old mother, Yoklern Jankaew, in her arms for the first time yesterday due to the help of many Thai people and a three-month search that took her from Koh Pha Ngan to Phang Nga province, and finally to Phuket.

“I was contacted yesterday [Thursday] and told that my daughter was coming to see me. I was surprised and confused, as only a few people knew that I had a daughter,” said Ms Yoklern.

“But as they gave me more information, I started to believe that it was true.”

Mrs Ferreira showed up at Ms Yoklern’s doorstep with her husband Carlos and documentation proving who she was.

“I was told [many] years ago by my adoptive parents, who have since passed away, that my real mother was in Thailand. I have wanted to meet her ever since, but I didn’t know how to start,” Mrs Ferreira said.

Her search began, mistakenly, in Koh Pha Ngan in September.

“I misunderstood, thinking that Pha Ngan and Phang Nga were the same place. I was upset when I realized that I was in the wrong area – I almost lost hope,” Mrs Ferreira explained.

However, Kingkaew Yoopakdee, an employee at the Pha Ngan resort in which Mrs Ferreira was staying, stepped up and offered to help.

“I met Mrs Ferreira while she was staying at the resort and knew that she was looking for her mother. I could see how badly she wanted to meet her, so I offered to help,” said Ms Kingkaew.

“I contacted the Takuapa district office in Phang Nga province, but I was asking for private information, so they refused to give it to me.”

Ms Kingkaew informed Ms Ferreira that she would need to contact the Takuapa district office herself in order to obtain information about her mother.

“I was informed about a woman who was searching for her mother, Ms Yoklern, in Takuapa. We started searching ourselves, and found out that Ms Yoklern had moved to Phuket with her son,” said Cherdchai Pattamayutanon, village headman of Takuapa Moo 5.

“I heard that her son was working on a fishing boat in Rassada. Luckily, one of my cousins works in the same place, so I believed I could find Ms Yoklern easily.”

Eventually, Mr Cherdchai was able to track down an address for Ms Yoklern.

Ms Kingkaew even took time off work to be with Ms Ferreira at the last leg of her emotional journey, which culminated in the reunion yesterday.

“They were hugging and crying the whole time they were together. They were able to have a conversation in English,” Mr Cherdchai said.

After Ms Yoklern and Ms Ferreira said their tearful hellos, Ms Yoklern told her daughter that she looked like her Australian father, who had left Thailand many years ago.

“The last thing I heard about my daughter was that her adoptive mother was taking her to Kuala Lumpur, Malaysia,” Ms Yoklern said.

She explained that she had been working as a maid for an Australian man who was a manager on a mining site off Phang Nga when she became pregnant with his child.

“We had a daughter together, named Tok-Ta. He already had a wife, so I named my brother as the father on the birth certificate,” Ms Yoklern said.

When Tok-Ta, now Kimberley Ferreira, turned six months old, Ms Yoklern gave her to a woman named Kim and her husband, who was also working on the mining site.

“Madame Kim [the adoptive mother] and her husband were my friends and were unable to have children. They loved Tok-Ta and promised that they would take very good care of my child,” said Ms Yoklern.

“I was uncertain of my future, and knew that she would have a better life and more opportunities with them.”