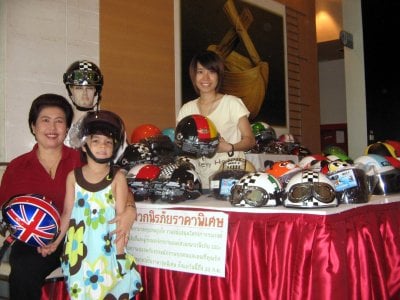 PHUKET: There are only two days left to enjoy special discounts on children’s motorbike helmets on sale at Bangkok Hospital Phuket.

The sale, which runs daily from 9am to 6pm, offers five different types of children’s helmets at prices ranging from just 180 baht to 280 baht. Each style is available in a wide variety of colors.

Sunantha “Jae Taew” Sutthamongkol, owner of the Hup-aik helmet shop on Phuket Road, said she was contacted by hospital staff about setting up a special promotion to increase helmet use among youngsters.

Police want everyone traveling by motorbike, including passengers, to don crash helmets.

In the past, a traffic law requiring everyone on a motorbike to wear a crash helmet was seldom enforced, but it will be in Phuket City Police District after the public awareness part of the campaign ends.

A review of CCTV footage by police before the campaign found that while many motorbike riders wore helmets, few passengers did.

Worse yet, helmet use among children was found to be “negligible” and until recently standard-quality helmets for children were hard to find on the island.

Ms Sunantha said sales have been brisk and many people are taking advantage of the prices at the Bangkok Hospital event, which are lower than those offered at her shop.

The most popular helmets are those manufactured by the Index company to resemble ladybugs and pandas, she said.

Phuket City Police Superintendent Wanchai Ekpornpit, the driving force behind the “100% helmet use” campaign, said police will continue to pull over violators at checkpoints and make them watch a movie graphically showing the dangers of not wearing safety helmets.

Violators’ licenses are only returned after they have viewed the movie or paid a fine.

Col Wanchai declined to say exactly when the awareness campaign would end and police will start issuing fines to all violators.

Phuket City Police will review the statistics at the end of the month before making a decision, he said.

Col Wanchai recently said helmet use has reached as high as 95% in Phuket Town and that he expects the campaign to save as many as 30 lives annually, not to mention cut down on countless injuries.

There have been reports from some school teachers of children shaming their parents into buying helmets for them, he added.