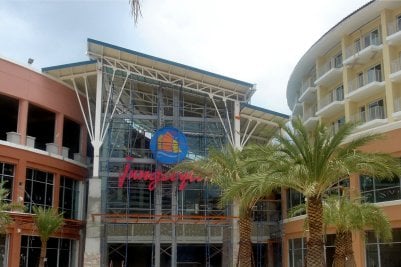 PATONG: Junceylon, the new entertainment complex in Patong, has hit liquidity problems, but these are being worked out and the giant center will still open in November, a source told the Gazette yesterday.

The source, who asked not to be named, said that Jungceylon’s money woes started in April and the company has applied for help from the Bankruptcy Court in Bangkok in restructuring its relationships with creditors.

The court has the power to act as guarantor, if necessary, between debtors and creditors, and has been successful in resolving a number of difficult situations, including, recently, that of the Blue Canyon Golf Club.

Due to the tsunami, the source said, the opening of the entertainment and shopping complex was postponed from the beginning to the end of the year. The resultant loss of income and liquidity led to conflict between management on one side, and shareholders and creditors on the other.

A bank subsequently sued the complex for defaulting on a loan, the source continued, and the management is obliged to present its marketing plan to the Bankruptcy Court in October.

Jungceylon occupies 55 rai of land off Rat-U-Thit 200 Pi Rd in Patong. The complex will have two hotels – Burasari and Four Points by Sheraton – a seven-screen SF Cinema, a bowling alley, game zones, a Carrefour supermarket and “Little Phuket” – an “entertainment zone” of bars and restaurants.

Umnauy Kanjanopas, Vice-President of main contractor Powerline Engineering, explained that since last year’s tsunami disaster, construction of the project had been suspended due to a shortage of labor during the recovery period, as well as the decision to postpone the opening date.

However, after discussion with the Jungceylon board in May, it was agreed that construction should resume. He confirmed that the complex will be ready to open on November 1.

Rena Undomkunnatum of management company Phuket Square Co said that, apart from Powerline Engineering, Jungceylon has requested other contractors to complete their work as soon as possible to ensure that the complex will open as scheduled.

Since the opening date of Jungceylon will coincide with the start of the high season in Phuket and the annual Patong Beach festival, she said, the management of Jungceylon is confident that the complex will help attract tourists and investors both from Thailand and around the world to come and witness the grand opening ceremony.

Eventually, Jungceylon will benefit the whole tourism industry in Phuket, she added.

The Gazette contacted Jungceylon shareholders who declined to comment in detail on the financial situation. However, they too confirmed that Jungceylon will open on November 1.