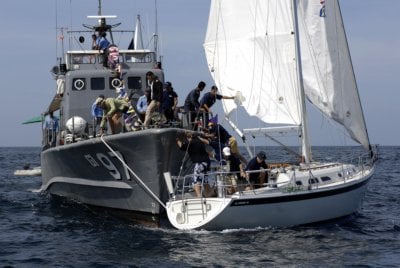 PHUKET: Frank Pong of China skippered his 75-foot yacht Jelik to first place overall in the hotly-contested Racing class in the opening race of the 20th King’s Cup Regatta today.

“We had a great day and crossed the line well in front of the rest of our class, but even with our heavy handicap we managed a first place on corrected time,” said Pong.

A record number of 101 boats divided into 13 classes boats started the regatta in reasonable winds, which picked up to 10 to 13 knots off the Kata Beach Resort.

“The wind was light at the start, which was good for a lot of the newcomers in the fleet as many of them are racing for the first time,” said Principal Race Office Howard Elliot.

“We had a good, clean start in winds of six to eight knots which picked up later to between 10 and 15 knots. Towards the end of the day’s racing the winds dropped and we shortened some of the courses.”

Drama came early in the regatta when George Foose’s yacht Freewind broke her boom after it became entangled with the anchor line of the Royal Thai Navy boat being used as one of the marks on the course.

Crew on the Navy boat and Freewind worked frantically to free the yacht, though the broken boom spelled early retirement for Freewind.

It was a disappointing day for the locally-designed and built Firefly 850 catamarans, which have been the center of attention with five of the super-fast boats racing in their own class for the first time.

“The Fireflys didn’t do well today as they prefer more wind,” said Elliot. “The current was very strong out there today and the light winds didn’t suit the Fireflys.”

One of the Fireflys holds the record as the fastest boat in Thai waters, and if the wind picks up as expected in the next few days, some exciting racing is expected between the five entries.

Another very fast catamaran racing this year is Benoit Lasaffre’s Atmosphere, which is competing in the Multihull Racing class. It finished almost 90 minutes in front of its nearest rival and will take some catching over the next fours days of racing.

Henry Kaye’s old boat The Sting, which is being sailed by Phillip Day, finished a distant second with Chimera, sailed by Christopher Edwards, in third place.

A large number of Thai sailors are also taking part in this year’s regatta and Lt Peera Sagultem skippered Royal Thai Navy 1 into first place in the highly-competitive IRC2 class.