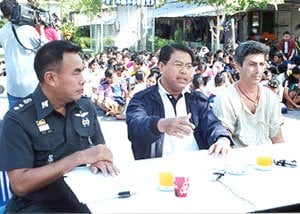 PATONG: Alleged Italian drug trafficker, Massimo Goggi, 47, was arrested by Phuket Immigration Police on Valentine’s Day while walking along Patong Beach. Goggi is wanted in Italy for drug trafficking, and an international warrant was issued for his arrest eight years ago. But it was only 10 days ago that Italian police tracked him down to Phuket and asked local police for assistance. Pol Col Apirak Hongtong, Superintendent of Phuket Immigration Police said, “We received an international arrest warrant, including pictures of Goggi and his wife, Tiziana Fornaciari. “We investigated and were told the couple were staying at the Safari Hotel and that the wife was working at the Savoey Seafood Restaurant in Patong. “Further enquiries revealed that Goggi was in the habit of walking along Patong Beach every evening. That is where we arrested him.” Pol Col Apirak said Goggi had confessed that he had been hiding in Phuket since 1999. He also allegedly confessed to selling heroin to Italian residents in Phuket, but Col Apirak said that no action would be taken on this admission because police had no corroborating evidence. Police said Goggi was found to have a stolen Italian passport in which his photograph had been substituted for that of the original holder. Police have been trying to locate Ms Fornaciari, who they say has disappeared since Goggi’s arrest. She is wanted for questioning about her involvement in the drug trade. Goggi is currently being held in the Phuket Immigration Police cells until arrangements can be made to extradite him to Italy.