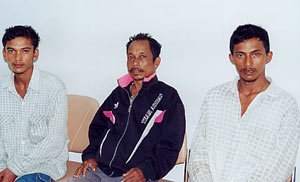 PATONG: The three Indonesian fisherman who washed ashore at Kalim Beach yesterday morning have been cleared of connections with the terrorist organization Jemaah Islamiyah (JI), Pol Maj Narong Laoprathumviroj, an Inspector at Kathu Police Station, has told the Gazette. “They were all investigated and we have verified that they did not come to stage acts of terrorism in Thailand during the [Asia-Pacific Economic Cooperation] meetings. Reports that we found a card identifying them as JI members are absolutely wrong,” Maj Narong added. He explained that the three men had ordinary Indonesian civilian ID cards, which identified them as a citizens of Aceh, Indonesia. The men identified themselves to the Gazette as Abdullah Ali, 56, Bactir Hasbi, 28, and Zahkin Fikri Abdulah, 22. The three washed ashore at 6 am yesterday with their fishing boat after it capsized in a storm. They had been adrift for five days without food (see also https://thethaiger.com/news/index.asp?id=2957 ). They are now being held at Kathu Police Station, where they will remain until Immigration can organize their deportation to Indonesia.