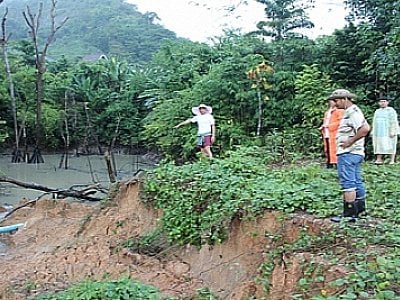 PHUKET: Continuing rains across Phuket last night caused a mudslide that forced the evacuation of a residential estate in Rassada.

There was considerable property damage, but no injuries were reported.

After another night of heavy rain, the mudslide hit the Baan Natkamon estate at about 3am.

The first home inundated with flowing mud was that of Opas Chupan, whose unit is located next to the perimeter wall of the estate.

“Around 3am I awoke to the sound of water running around my home. I heard a big bang and looked out of the window to see water and mud flowing down the street – in and around our homes. So, I called my neighbors to alert them. My entire backyard area and those of my neighbors were inundated by mud and water,” Mr Opas said.

Several cars parked on the road were swept downslope by the torrent, many sustaining damage as they crashed into one another and other objects.

Sompong Pornphorm, whose home also suffered damage, said it was not the first time such a thing has happened.

“This is the second time. I believe it is the result of a hillside road project upslope that blocked a watercourse that used to drain runoff. Now, instead of being channeled elsewhere, floodwater runs directly into our housing estate,” he said.

Satellite images taken in 2004 and in March last year reveal the extent of development that has taken place in the area. Construction of the estate, on land that was once heavily forested, was completed in 2008.

Phuket Vice Governor Somkiet Sangkhaosutthirak and Rassada Mayor Suratin Lianudom were at the scene early this morning to assist in the cleanup of the mud, which stretched approximately one kilometer in length.

Fortunately, the busy Rassadanusorn Road was cleared up by heavy machinery by the time residents were making their morning commutes.

However, Mayor Suratin asked the residents of the Baan Natkamon estate to evacuate “until the rain stops” for their own safety.

“I am concerned for their safety in the event another landslide occurs. I have declared this housing estate and its surroundings a disaster area. We will monitor the situation closely and look for the best solution to the problem here,” he said.

The manager of Baan Natkamon estate told the Phuket Gazette he believed the source of the mud was a breached earthen dam upslope.

“My housing project was finished in 2008. At that time we had no problem with landslides. The owner of the land above our estate recently built a small reservoir for his own personal use without permission from Rassada Municipality,” he said under the condition his name not be published.

The landowner, part of the the same family that sold him the land to build the estate, had constructed both a road and a weir upslope, blocking drainage in the area.

“Even though they installed a six-inch water pipe to divert excess flow, it wasn’t enough to handle all the water flowing down from higher elevations. As a result, the water overflowed their private reservoir and flooded our estate,” he said.

After a discussion with Mayor Suratin, the manager is considering legal action against the land owner.

“I have discussed this with Mayor Suratin. I may have to sue the landowner since it caused a lot of damage to our housing estate and affected its residents,” he said.

Training tips for the Phuket Triathlon