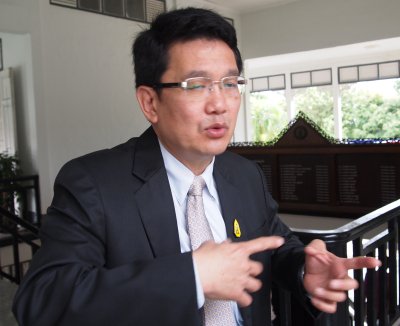 PHUKET: A team of Ministry of Information and Communication Technology (ICT) experts yesterday consulted with Phuket Governor Tri Augkaradacha on how to improve communications during future disaster evacuations.

The team, led by ICT communications expert Chaiyun Pengkiatpairot, aims to prevent a mobile phone network overload, such as that which hindered communications during the evacuation of tsunami-risk areas on April 11.

“Communication systems failure is one of the most important issues. People on Phuket could not phone each other or receive calls from off-island. The only communication system available on the day was two-way radio,” said Mr Chaiyun.

“Apart from inconveniencing the public, the systems failure also prevented emergency services coordinators from contacting their teams on the ground and other organizations. The ICT Ministry has to fix this problem,” he added.

Under the plan presented, two-way radios would be able to interface with mobile phones, landlines and internet-based communications. The system has been developed by the ministry in cooperation with Kasetsart University, which has already registered a copyright for the technology, Mr Chaiyun explained.

“After talking with Governor Tri, I can report back to the ICT [Ministry] and begin planning to implement the system here in Phuket. Once it is in place, Phuket will have a stable communications network capable of operating during emergency situations,” Mr Chaiyun added.

Governor Tri said that he also wanted the ICT to fix two tsunami warning towers that failed to sound on April 11.

According to seismologists who have studied the recent activity, earthquakes centered in the immediate region should be limited to a maximum theoretical magnitude of around 5.0 to 6.0 on the Richter scale, Gov Tri said.

While the recent tremors are thousands of times smaller, he has nevertheless ordered officials to monitor the situation carefully and provide assistance to those who have suffered property damage, he added.

In a related development, Public Health Minister Wittaya Buranasiri ordered an inspection of two buildings at Patong Hospital after cracks were noticed after the recent tremors.

“I was informed that the earthquake that struck Phuket on April 16 caused cracks in the Rak Cheeva building at Patong Hospital, so I ordered the engineering division to go to check the damages.

“If they find any damage that could affect the structural integrity of the building, they should report it to the Office of the Permanent Secretary,” said Minister Wittaya.

Thus far Patong Hospital is the only hospital in Phuket to report earthquake damage, he said.

He has also ordered Surat Thani, Ubon Ratchathani, and Phitsanuloke hospitals to each loan one ambulance to the Phuket Provincial Public Health Office in the event that a disaster occurs along the Andaman Coast, he said