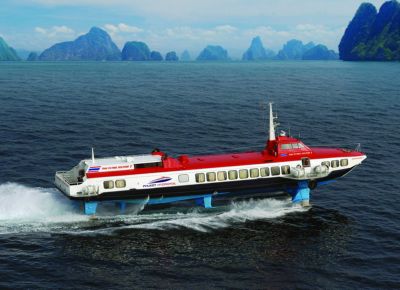 PHUKET: At present it sits on the quay at the Phuket Deep Sea Port in Ao Makham, looking like it’s just waiting for Buck Rogers or Dan Dare to come aboard and blast off into space.

It’s not quite that exotic, however. This is the first of three hydrofoils that will whisk passengers off to Phi-Phi, Krabi, Koh Lanta or the Similans at speeds of around 35 knots (for all you landlubbers, that’s about 65 kmh), making it possible to get to Phi Phi, for example, in 40 minutes, and Lanta in another 20.

The hydrofoil is originally a Russian design, the Kometa (“comet” – over to you again, Dan Dare). But this one and the other two to follow are from Athens, where hydrofoils are a standard way to get from the port of Piraeus to the Greek islands. Kometas are also used in Scandinavia, China and elsewhere, where they have proved their robustness and reliability.

The owner is Sakwuth Udomsrisak, who is investing a massive 45 million baht for each of the craft, including 9 million baht just for shipping each vessel here, along with a stem-to-stern overhaul and the installation of the most up-to-date equipment, including a pair of new 1,050-horsepower diesel engines from MTU of Germany.

His company, Phuket Adventures, already owns dozens of minibuses and speedboats, and he has a couple of resorts as well. “Not everyone likes bumping about in a speedboat,” he explains. “Younger people find it exciting, but older people find it uncomfortable. We are aiming the hydrofoils at 4- and 5-star hotel guests.”

The hydrofoil will certainly be a smoother ride. Once it hits about 20 knots, it begins to “fly” as the hydrofoils – like underwater airplane wings – lift the hull above the water. The result is a ride that feels more like an aircraft. The vessel can handle wave heights of up to 3 metres without any of the 132 passengers feeling the bumps.

The only thing it needs is relatively deep water when it “lands” and “takes off”, which is why the initial service will be from Ao Makham, where Sakwuth is building a special passenger terminal. He hopes to be able to run the Similans route from a floating jetty off the west coast – possibly Surin or Patong Beach.

Prices will be very similar to those for speedboats. A package trip to Phi Phi, for example, with two-way transport, lunch and a tour, will cost around 3,200 baht (approx US$ 95.00), Sakwuth says. A similar package to Lanta will be around 4,000 baht. One-way tickets will be available, probably at 1,700 and 2,200 baht respectively.

And if you are no longer keen on putting your money into stocks or bonds, Sakwuth says he’ll be delighted to talk about investment. Just call him at +66 (0) 81-895 4243 or email him here.