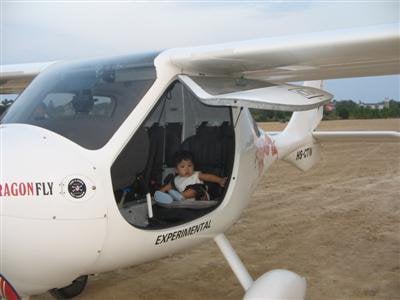 PHUKET (PA KHLOK): Phuket’s first private airport got off to a flying start yesterday, the key day in a three-day Fly-In celebration to mark the opening of Phuket Airpark.

Covering 116 rai about six kilometers east of the Heroine’s Monument, the 500-meter airstrip forms the central attraction to what its developers hope will be Phuket’s most unique real estate development project, allowing small plane owners to fly in and park right in front of their own homes – with no need to worry about flight delays or takeovers at Thailand’s commercial airports.

About 10 small planes and one very large balloon gave free rides to local children, many of whom had never been inside an aircraft before.

There were also prizes, performances and impressive aerial stunts by some of the 50 pilots who attended.

There was one particularly exciting moment when the gigantic balloon, ghosting into the Airpark from the east, brushed some treetops on the way down to an otherwise perfect landing.

The Fly-In was organized by the Airpark’s management and sponsored by the Absolute property group, Kingfisher beer, and the Phuket Gazette.