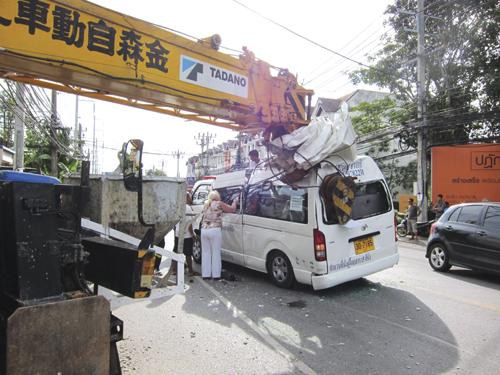 PHUKET: One lifestyle decision that anyone residing in Phuket (or even just on an extended holiday) will eventually come to consider, is whether or not to achieve transport independence – if not for the sake of convenience then certainly out of necessity.

It’s no secret that getting around via public transport in other prime destinations of the Kingdom – Bangkok, Khon Kaen, Haad Yai, Pattaya, or even Chiang Mai, for instance – is more convenient.

Indeed, the public transport options in Phuket are much more limited, if not confusing or
unreasonably priced.

Early in your Phuket experience, you might be willing to just hire motorbike taxis and personal chauffeurs, but this just won’t suffice for those with limited means, or who value their personal safety (for more information, just Google “Phuket taxi news”).

A ‘No-brainer’ or just no brain?
The next obvious option is to rent or buy a motorbike. Due to commute time and economic advantages, the motorbike at first seems like a ‘no-brainer’ – hence all the tourists renting and riding them. However, most people with half a brain will eventually come to the realization that driving a motorbike in Phuket (or anywhere in Thailand for that matter) is actually more like the ‘no-brain’ option. Whether you agree with that or not, the fact is that motorbike accidents remain one of the, if not the top non-natural causes of death in the Kingdom – for both Thais and foreigners.

The Number 1 choice by default
So, that brings us to the final option: automobile. Yes, cars, trucks and vans are relatively more expensive to acquire, maintain and operate. Yet they remain the most viable option for someone who wants transportation independence, while greatly reducing the risk of ending up on the wrong side of a four-foot wide tyre.

That said, simply acquiring an automobile, filling the tank and checking the oil is not enough to pull one out of harm’s way – far from it. I wish I could tell you that you also have to be cautious of traffic police, but that’s simply not an immediate concern for drivers in Phuket. So, why get a license at all? For me, it came down to insurance, and the financial risks I would be putting myself, and more importantly, my family in, if involved in a serious accident.

Make no mistake, not having a valid Thai drivers license is enough reason for any insurance company to deny a claim.

It is also a enough reason for a Thai police officer to jail you, if they so please. Having said that, there really is no excuse – get your Thai drivers’ license if you haven’t already.

If you already have a valid drivers license from your home country this can be converted into an international driver’s license in Phuket. For more information on getting that transferred check with our partner Thaivisa.com.

However, this is technically not enough in the eyes of Thai law (though it may be enough for some police officers – depending on how they feel that day).

The spokesperson confirmed that even tourists can apply for a one-year license as soon as they arrive in Thailand (as soon as they can make it to the Land Transport Office during operating hours).

And, for those with a valid license from their home country, who don’t posses an international drivers’ permit, it’s easy enough to get issued a Thai license, without having to go through all the tests.

Obtaining a Thai driver’s license
While the enforcement of traffic laws in Phuket may seem lax, the written and driving tests are not, and the officials at Phuket’s Land Transport Office can and will fail you if you don’t pass the strict criteria.

If I may give a final bit of friendly advice: name the parts of the test. At first, I failed the parallel parking test. Their demonstration used an ultra small Honda Jazz, making it look easier than it was.

Line your car up parallel with the car in front of the space you want to park in. (At the PLTO parallel parking testing station, there is no front car, so you’ll have to imagine that there is one.

Next, turn your steering wheel all the way in the direction of the parking space (left) and put the gear in reverse. Slowly back into the space, monitoring the rearview mirror on the driver’s side of the car. In an actual parallel park situation, you would be looking for the full width of the rear car to appear in the mirror.

At the PLTO station, there is no rear car, only three cemented poles. So, as soon as you see all three of those poles in the right, rearview, then you should adjust the steering wheel so that the wheels are straight, and you are slowly backing into the space at a 45 degree angle.

Now, you should look to the front car (three cemented poles), and turn your steering wheel all the way in the direction away from the parking space (right) as soon as you can, so that the front end of your car won’t hit the rear side of the front car (cemented pole).

If you wait too long, then you will have backed too far to be able to straighten yourself out. You only get to change gears five times to pass. A perfect park can be done in two to three gear changes.

Phuket Lifestyle: Call of the wild – a family’s journey out of captivity