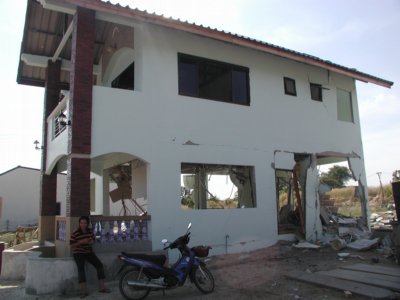 CHALONG: Three houses were badly damaged by improvised explosive devices (IEDs) that detonated about 2:30 am on Saturday. Police believe the blasts were motivated by a land dispute. No one was killed in the blasts, but two Burmese workmen were reported injured.

Chalong Police Superintendent Pol Col Chalit Kaewyarat told the Gazette that the 10 rai of land on which the homes stand is reclaimed tin-mining land.

The homeowners, who financed the building of the properties themselves, said that they hold TorBor 5 title deeds for the land. Approximately 100 families live on the land.

Samrung Mookwat, 33, had just moved into one of the houses. His two-story property, which cost him a reported 2 million baht to build, was destroyed in the blast, although he was not at home at the time. The other two houses were still under construction.

Chalong Police have several suspects and will contact the Land Office as part of their investigation, Col Chalit said.

He reported that other attacks, involving firearms and arson, have taken place in the past year or so. “The investigation might involve former suspects, although arrests have yet to be made. We are gathering more evidence first,” he said.

Col Chalit added that the police will liaise with the Phuket Provincial Land Department to investigate if there are any other claims on the land.

Speaking to the Gazette, The President of the Soi Songkun Residents’ Association, Komit Phumi, said, “The people who live here are generally quite poor and don’t have personal enemies.

“My feeling is that these ‘accidents’ and attacks are being orchestrated by people who have seen the value of the land here rise, and they want to scare us off so that they can buy the land cheaply.”

B2m of ya bah seized in Thalang