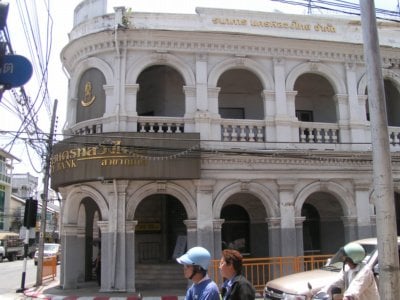 PHUKET CITY: Phuket City Municipality will renovate two Sino-Portuguese buildings in the heart of Phuket City with the aim of preserving the town’s cultural past.

The old Chartered Bank building at the intersection of Phuket Rd and Phang Nga Rd until recently housed the Phuket City branch of Siam City Bank, but will soon be converted to a cultural museum.

The Sino-Portuguese building is almost 100 years old and was one of the first bank buildings to be built outside Bangkok.

Although the Phuket Regional Treasury Office (PRTO) will maintain ownership of the building, Phuket City Municipality will be responsible for the renovations.

Phuket City Mayor Somjai Suwannasuppana said the building will be redeveloped as a learning center about “Old Phuket” lifestyle, culture and history.

She added that the building is an example of the town’s architecture that must be preserved for the next generation.

The old police station was built about the same time as the Chartered Bank building, and is now also owned by the PRTO.

The building, with the clocktower perched atop, was once the main office for the Kusoldharm Foundation and is currently a Phuket City Police patrol center mainly staffed by civil defense volunteers.

More than 60 million baht will be needed for the project, K. Somjai said, adding that the plans for the renovations are expected to be ready by year’s end.