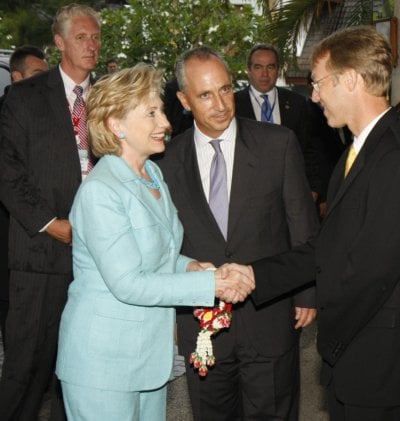 PHUKET: US Secretary of State Hillary Clinton and her diplomatic entourage flew into Phuket yesterday on two private jets.

Mrs Clinton was then whisked off to the Sheraton Grande Laguna Phuket, the Asean Ministers’ Meetings Phuket venue, where she gave a speech that included a call on the Burmese junta to release democracy leader Aung San Suu Kyi, who has been under house arrest for many years.

Mrs Clinton told Asean delegates at Laguna it was important that member countries encouraged the Burmese leadership to open up.

More attempts should be made to pressure the Burmese leaders to ‘change their direction,’ she said.

Mrs Clinton also urged North Korea to return to discussions on the country’s nuclear crisis. Only ‘irreversible de-nuclearization’ by North Korea will pave the way for a normalization of ties with the US and prevent the country from facing global sanctions, Mrs Clinton said.