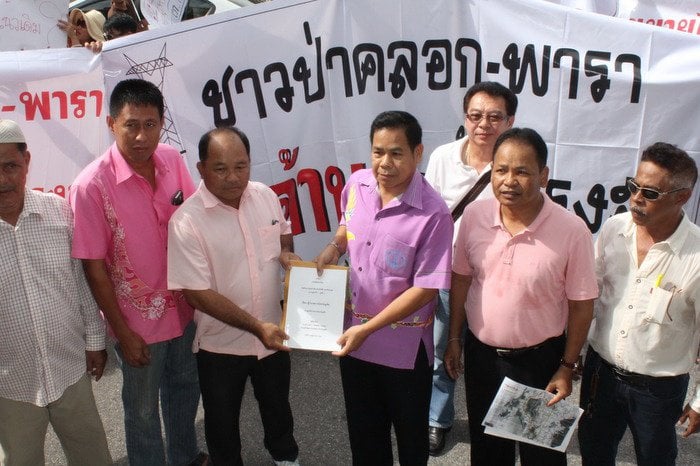 PHUKET: More than 100 locals from Thalang villages filed a complaint at Phuket Provincial Hall on Friday over the potentially negative effects a high-voltage power line project could have on their communities.

The project would see land expropriated to have 500 kilovolt poles installed in Pa Khlok and Baan Para and would require many villagers to relocate their businesses, said Natcha Eung Amnuayporn, who spoke for the group at Provincial Hall.

“This will affect hundreds of families. We do not want to hinder Phuket development, but the land we do business on would have to be expropriated in order to complete this project,” said Mr Natcha.

“How can we earn money during this time? Though we would get money from the expropriation, it is not as much as we make at work.”

Mr Natcha also noted that the project would take a toll on the environment and villagers’ health.

“Nobody wants to live near high-voltage power lines, and the construction will also require many trees to be cut down,” he said. “In addition, we are worried about the health of locals and the safety of our children who live near the lines.”

In the complaint, the villagers offered seven alternatives for the Phuket Provincial Electricity Authority (PEA) to consider regarding the project.

1. Update the old power lines with high-temperature, low-sag conductors that can handle a higher voltage.

2. Install more poles along the same line as the current poles, rather than building a new line elsewhere.

3. Void the previous 115KV lines and build new 500KV lines, but in the current spot.

4. Build a 500KV power plant in the north of the island that can convert electricity to from 500KV to 230KV and 115KV and send it through the current power lines.

5. Create an underground high-voltage line. It is safer and will improve the appearance of Phuket.

6. Create an underwater high-voltage line which will run from the mainland in Phang Nga to Koh Kaew.

7. Develop a solution that does not affect people in the area.

The villagers noted that they had also filed a complaint at Thalang Police Station against the PEA.

An officer at Provincial Hall, Prajiet Aksornthamkul, accepted the letter and told the group that he would inform Governor Nisit Jansomwong.

“The Governor’s Office has already sent the letter to PEA so that they can clarify the project details, especially about the land expropriation. We have not heard anything from them yet,” he said today.