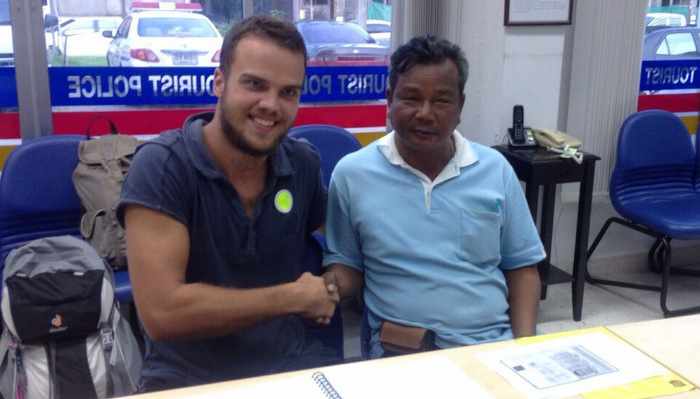 PHUKET: A grateful German student had his bag of cash returned to him last night thanks to a helpful Phuket van driver who spotted it at Rassada Pier on Thursday afternoon and handed it in to police.

The bag, containing nearly 30,000 baht in combined currencies, was left behind at Rassada Pier by 22-year-old student Sebastian* and turned in by van driver Mongkol Khampanta, who found it near his taxi company’s kiosk after dropping off a group of tourists (story here).

Mr Sebastian arrived at the Phuket Tourist Police headquarters in Phuket Town at 5:30pm yesterday to pick up his belongings, and Mr Mongkol was there to meet him.

“I am so impressed. Thai people are kind. I’ll be back in Phuket for sure, and will tell my friends about this,” said Mr Sebastian.

“I didn’t expect to get it back. I’m so glad to see that Phuket has such a good driver.

“I would like to thank Mr Mongkol and the police. Thank you very much.”

Phuket Tourist Police chief Urumporn Koondejsumrit told the Phuket Gazette how they were able to reunite the honest driver and German student.

“Tourist Police were contacted by Phi Phi Police after Sebastian filed a complaint there about his missing bag before he left the island to return to Phuket,” he said.

“We decided to call Mr Mongkol so he could hand over the bag himself.”

Mr Mongkol was also relieved to see the bag returned to its rightful owner.

* The family name of the student has been withheld at the student’s request.