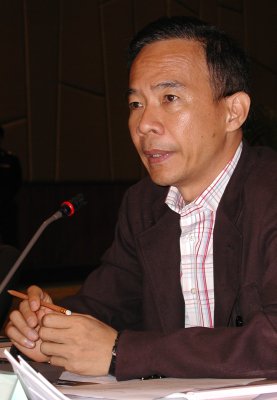 KARON: “We’re trying to help ourselves, but we can’t do it on our own.” That was the message sent out to the government by representatives of the six tsunami-hit provinces of Thailand after they met in Phuket.

Delegates from tourist associations in all six provinces told the Andaman Tourism Restoration Committee meeting at the Hilton Phuket Arcadia Resort & Spa how tourism in their areas had been harmed by international media coverage of the December 26 tsunami.

Somchai Silapanont of the Phuket Tourist Association (PTA), told the conference – and Deputy Prime Minister Suwat Liptapanlop, “At first we understand that the people who lost their families and homes must be helped urgently, because they were directly affected, but there are a lot of businesses and people who have been left to survive on their own.

“Tourism is the lifeblood of this region; if the owners go, it will create a chain reaction of economic problems. The government should take care of this before any other long-term projects.”

Unemployment was a concern for Chidchai Sakornbadee, of the Tourism Council of Thailand and Honorary Secretary General of the Association of Thai Travel Agents.

He said he had heard of employers laying off 20 to 30 staff at a time, as they struggled to keep their businesses afloat.

“The bank loan system isn’t helping us,” said K. Chidchai. “The government should find some financial institutions to help us. The help from the government and the banks doesn’t match what we need.”

Ittirit Kinglek of Krabi Tourist Business Association also criticized the government for the gap between its promises and delivering on the promises. Initiatives should be implemented faster, he said.

However, DPM Suwat remained optimistic that the tourism situation would improve.

He commented, “It will not be this way forever. I believe that foreigners are aware of the Thainess and the generosity showed by Thai people after the disaster, and this will help tourism in Thailand improve sooner than we expect.”