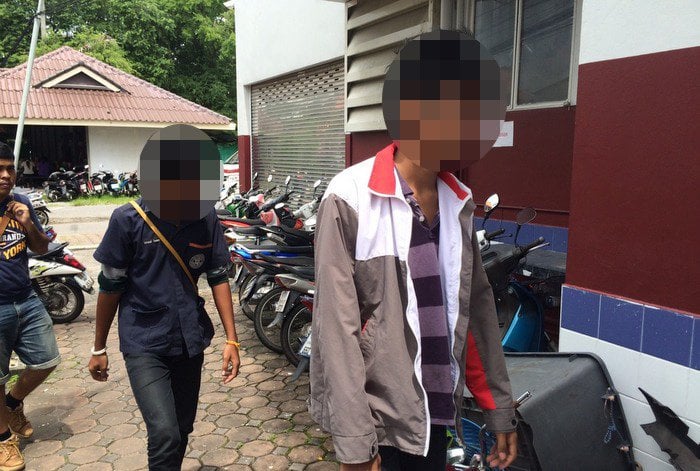 The video posted on Facebook yesterday shows a car quickly overtaking the two teens. However, once the car is past, the teens take off after it on their motorbike with the passenger threatening the car driver with the firearm.

The driver of the car, Veerachon Chuaykhao, filed a complaint with Phuket City Police. Officers were quickly able to track down the 17-year-old suspects, who were identified by officers only as ‘Mr A’ and ‘Mr B’.

“We were able to locate the real owner of the bike, who explained that he had pawned it off to the mother of Mr A,” Phuket Provincial Police Deputy Commander Teerapol Thipjaroen said. “After comparing pictures from Mr A’s criminal record – he had already been arrested for reckless driving and speeding – with those from the video footage, we were confident he was our guy.”

Police arrived at the suspect’s rental home in Kathu and found both suspects standing outside with the motorbike – the licence plate was removed.

“Mr A confessed that it was him in the video clip. He said that he had taken of the plate, ditched the firearm and was hiding in Kathu after he saw the video,” Col Teerapol said. “Mr B, who has a drug-related criminal record, also confessed to his participation in the incident.”

Mr A told police that the way Mr Veerachon had drove past him on the road was insulting, so he took out the gun to threaten him. He allegedly had no intentions of actually causing bodily harm, Col Teerapol explained.

The teens were charged for the illegal possession of a firearm and intimidation.