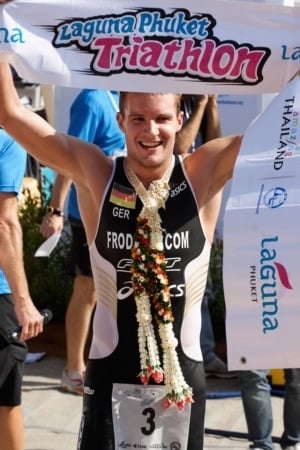 The South Africa-based superstar posted an overall finish time of 02:24:56, besting the previous record set by Richie Cunningham (AUS) in 2008 by over three minutes.

Frodeno was followed home some 12 minutes later by professional athlete Matthieu O’Halloran (CAN) in second place with a time of 02:36:58. Balazs Csoke (HUN) completed the top three, finishing in 02:38:18.

Frodeno said after the race: “The bike section was a challenge due to my inexperience of the course and knowing how to pace this particular race…I am amazed at the fantastic organization and the welcoming people, I am so happy to finally be here, I have been trying to get to the race for the last three years – the event has got a great festival atmosphere.”

Radka Vodickova (CZE) won the 2009 Pro Women’s championship in a time of 02:46:15. She was pushed all the way by defending champ and thrice Ironman Champion Belinda Granger (AUS), who finished second in a time of 02:49:51. Fellow Australian Rachael Paxton took the third podium place with an overall time of 02:52:16.

Some 1,000 athletes crossed the start line to compete in sizzling conditions at Laguna Phuket Triathlon on December 6.

The race began at the beachfront of the Laguna Beach Resort with the first wave starting at 7am with hundreds of triathletes vying for an early lead in the first leg of the Triathlon.

The 1.8k swim crossed two bodies of water, through the Andaman Sea followed by a beachside lagoon. First out of the water was Jan Frodeno with a swim time of 00:21:54, followed by Matthieu O’ Halloran 45 seconds behind in 00:22:39.

First male to complete the 55k bike course through Phuket’s tropical countryside was Jan Frodeno in an impressive 01:20:15, ahead of Matthieu O’ Halloran who came in second in 01:26:37, and defending champion Richie Cunningham in third.

The fastest Thai male finisher was Chadarak Chaikamjorn in 03:01:33, while the first Thai woman to finish was Natcha Pianprasobsuk who completed the race in 03:23:52.

Weather conditions for the 16th Laguna Phuket Triathlon were hot, with temperatures reaching well above 30 degrees Celsius during the bike and run segments.

The event saw an estimated 1,000 athletes officially start the race in an attempt to conquer the 1.8km swim, 55km bike and 12km run in and around Laguna Phuket.

Competitors represented more than 40 countries and ranged in age from 18 to over 70 years old.

The next Laguna Phuket Triathlon is scheduled to take place on November 28, 2010: Start training now.