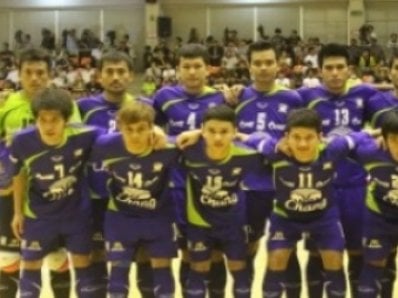 PHUKET: With the entire futsal world’s eyes now focusing on Thailand, pressure is mounting for the host country to put on a respectable performance in the World Cup, which kicks off in Bangkok this Thursday.

Having failed to progress past the group stage in their three previous World Cup appearances, Thailand face the high probability of history repeating itself.

Though ranked 11th in the world, the ‘War Elephants’ have struggled to harness their full prowess, having lost five of their last six friendly matches, including three last week against lower ranked squads in a World Cup warm up tournament dubbed the “All Star Festival”.

In what was expected to be a confidence-boosting opportunity, Thailand instead suffered defeats to world no 30 Australia (4-5), no 35 Panama (5-7) and an ever-shocking loss to no 46, the Solomon Islands (3-4), despite winning their opener 4-3 against world no 28 Egypt.

Hoping to have shaken the bad form out of their system, the Thais will face an uphill battle in Group A, pitted against three strong sides – Costa Rica, Ukraine and Paraguay.

If Thailand learned anything from their unsuccessful warm-up tournament, it is that they should not underestimate their first opponents on Thursday: world no 22 Costa Rica.

Ranked 8th in the world – the highest ranked team in Group A – Ukraine are expected to be more aggressive this year than ever before, and Thailand would be wise to maintain a tight defense in their second group-stage match on Sunday, November 4.

Ukrainian coach Gennadiy Lysenchuk remarked: “We are varying our tactics more these days, and are very good at pressing opponents; when necessary we can defend really well; and we are also strong at set pieces.”

Two players to watch out for on the Ukrainian side include #7 Maxym Pavlenko and #6 Sergiy Cheporniuk.

Thailand’s final opponents, world no 9 Paraguay may be Thailand’s toughest, judging from their meeting four years ago.

The only time the two sides met was in the last World Cup in Brazil, with Thailand losing 0-8 – a tournament high score for the Paraguayans and a low for the Thais.

Paraguay are determined to repeat such a performance, with their eyes fixed on the ultimate grand prize.

Team captain Fabio Alcaraz remarked: “We’ve been together since 2004 and it’s time for us to win. We’re used to facing big teams and we like that.”

In addition to star captain, #3 Fabio Alcaraz, other players to look out for include #9 Juan Salas and #10 Walter Villalba.

Key players to look out for on the Thai side include #9, Suphawut Thueanklang and #12 Surapong Tompa.