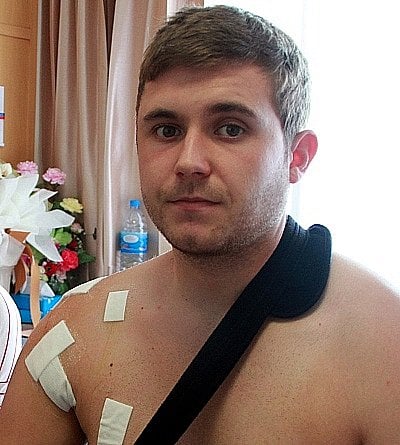 PHUKET: The police officer investigating the vicious gang attack in Krabi last Monday night has confirmed to the Phuket Gazette that – at this stage – he is not investigating any allegations of an attempted rape .

The news follows British tourist Jack Daniel Cole being reported as saying that “he feared the gang – mostly young men with perhaps two of them female – was intent on raping Ms Clifton.”

Another report stated that Mr Cole “thought that they were going to kill him and rape his girlfriend, because she was being held back by two Thai men around 20 meters away.”

“He remembers himself yelling ‘get off her’, to the Thai men,” said the report.

However, Lt Col Niwat Pimket of the Ao Nang Police told the Gazette today that Mr Cole made no such complaint in his report to the police.

Neither did his female companion.

“Mr Cole gave a statement that concurred with that given by the suspects. He also said that he did not remember the suspects’ faces and that he could not identify the men because it was dark. He initially reported that only about two to three men attacked him,” Col Niwat said.

“The attack did not start over any threats of sexual abuse at all; he [Mr Cole] did not mention anything like that during our initial investigation,” he added.

Col Niwat was unaware that Mr Cole had made the allegations through the media, with reports being echoed in high-readership publications including the Daily Mail Online.

“According to our investigation, Mr Cole and his girlfriend were walking along when one of the young men threw a rock at them. Mr Cole apparently turned to ask why they were throwing rocks, then the young men surrounded them.

“They had a big argument, then the men attacked him,” Col Niwat said.

The Gazette was informed late this afternoon that Mr Cole will travel to Krabi tomorrow morning to attend the preliminary hearing against the suspects in court.

It has yet to be confirmed whether or not the complaint against his attackers will be amended.