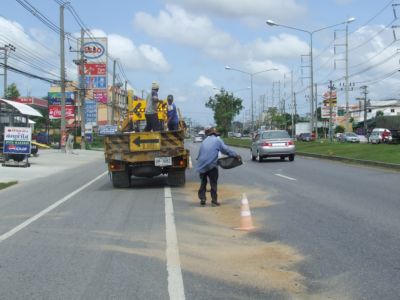 Several riders crashed and fell off their bikes, although none were seriously injured.

The 19-year-old truck driver didn’t notice there was diesel leaking from the truck until it ran out of fuel and came to a complete standstill opposite the Isuzu car center.

At least 200 liters of oil leaked onto the road on a three-kilometer stretch from the Esso gas station to the Heroines’ Monument.

The Rassada Crane Company truck was heading from Thalang to a building site on Soi Nanai in Patong at the time.

One of the riders who fell off his bike was a policeman, who refused to give his name.

“It doesn’t matter how good a rider you are, you’re still going to fall off on a road covered in oil like that,” he said.

Officers from Srisoonthorn Tambon Administration Organization covered the slick with sand to absorb the oil and, they hoped, prevent further accidents.

Police said the truck driver will “probably” be fined.