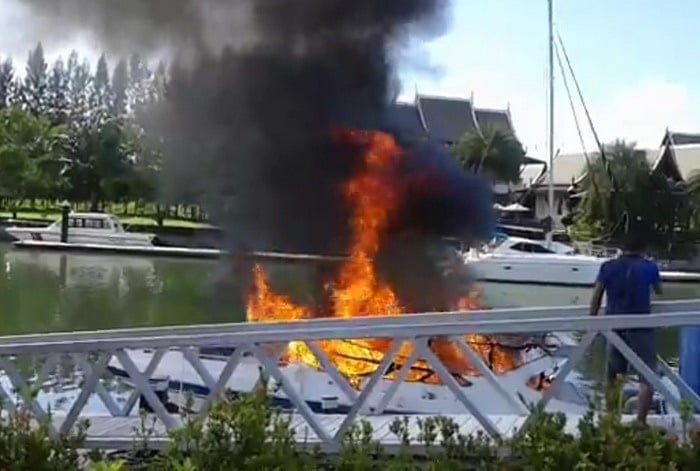 PHUKET: Five men were injured when a resort’s transfer boat burst into flames while refueling at the Royal Phuket Marina (RPM) at 9am yesterday.

Only two of the men injured were on the boat and employees of The Village Coconut Island Beach Resort Phuket, confirmed the resort’s director of sales and marketing, Tom Gordon. It remains unclear why the other three men injured in the incident were in the vicinity of the boat when it caught fire.

“There were no guests injured in the incident, as our policy is to never have customers on board when we are fueling. However, our thoughts and wishes go out to the one member of staff who is making a speedy recovery in hospital,” Mr Gordon told the Phuket Gazette this morning.

“We believe something must have happened at the fueling station that caused the fire. Given what happened, we followed protocol to prevent any further damage or harm.”

The Village Coconut Island’s speedboat, H2O, had just taken on fuel when it burst into flames, 29-year-old RPM employee Preecha Samapong, who had just filled the boat, told police.

“Sunan Jarernphon, the captain of the tender for Royal Phuket Marina, told us that he immediately sped out to rescue the victims and move the boat out of the marina to prevent it from causing any further damage,” said Lt Chatree.

The boat was moved about 300 meters away from the marina, where strong winds continued to fan the fire until the boat sank.

The two men who were seriously injured were taken to Mission Hospital, while the other three received first aid treatment by rescue workers at the scene.

“We are still looking into what might have caused the fire. At this point, we are waiting for everyone injured to recover so we can start questioning them,” Lt Chatree said.

RPM and The Village Coconut Island are looking into the incident and will be releasing a full statement very soon, RPM Director of Marketing and Operations Jay Walker told the Gazette this morning.

A Decade Ago: Phuket shelter remains in dog house