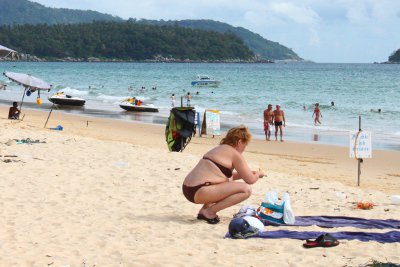 PHUKET: One tourist has drowned and a Thai woman narrowly escaped a similar tragedy after being caught in strong surf on Phuket’s west coast this afternoon.

Uten Singsom, head of the Phuket Lifeguard Club team at Kata-Karon, told the Phuket Gazette that a lifeguard pulled a Thai woman, aged about 30, from the surf in front of Karon Circle at about 2pm.

“She was caught in a rip current but she was pulled out of the water by a lifeguard volunteer,” he said.

Very soon after, a tourist pulled a French man, also on holiday in Phuket, from the water about 200 meters to the south.

“The tourist said he first saw the man floating face down in the water. The tourist pulled the Frenchman up onto the beach and lifeguards ran to provide assistance there,” Mr Uten said.

A Kata-Karon Municipality ambulance rushed the French man to Patong Hospital. A French woman, believed to be the man’s partner or wife, accompanied him, Mr Uten said.

Sadly, the French man was pronounced dead at the hospital, he added.

The news today comes while there are no lifeguards officially working – with pay – at any of Phuket’s popular tourist beaches since the Phuket Lifeguard Club contract with the Phuket Provincial Administration Organization (OrBorJor) expired in April.

Mr Uten explained that his team were working voluntarily in order to provide some protection for tourists from the strong surf and rip currents at this time of year.

Furious with today’s incidents, Mr Uten urged the OrBorJor to at least issue some lifesaving equipment to the volunteer lifeguards.

“Even though they are not getting paid, our lifeguards are still on the beaches. Can the OrBorJor at least give use some equipment to use to save people’s lives while they make their mind up over the contract,” he said.

On Wednesday, an OrBorJor official told the Gazette that the lifeguards were likely to return to duty on Monday, now that the OrBorJor finally has a contract to approve after two rounds of accepting bids for providing lifeguard services passing by with not a single organization applying to provide the services.

However, only yesterday were beach vendors at Nai Harn Beach in the south of the island calling for lifeguards to be reinstated as quickly as possible lest a tragedy occur.

One beach vendor said many tourists were left to save themselves from the dangerous surf.