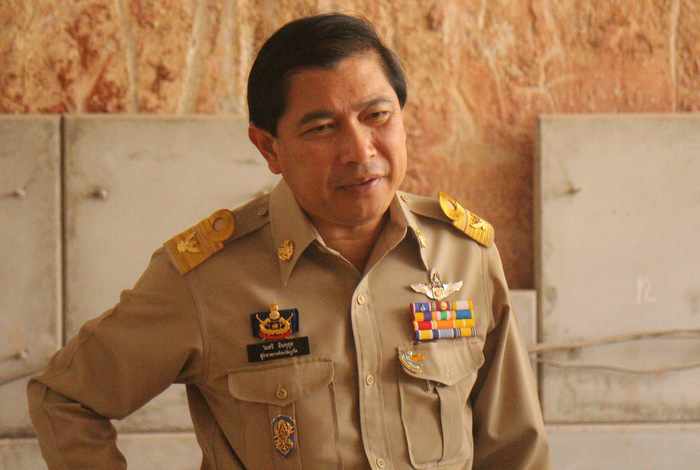 PHUKET: The trial opening of Phuket’s first underpass, at the Darasamuth Intersection on the bypass road, will not begin until at least next month, the Phuket Gazette has learned.

“The water pumps were set to be finished in time for the mid-May trial period, but the underpass flooded [in mid-May] and the new drains were overwhelmed,” project manager Narong Horee, of Italian-Thai Development Co Ltd, told the Gazette today.

“The road was ready to open for its first trial, but now we need to fix the drain systems.”

“I cannot confirm that the underpass will be completely finished by the original October 5 deadline, but we are doing our best to have construction completed in time for the Asian Beach Games,” he said.

However, Phuket Governor Maitri Inthusut, who visited the underpass this morning, told the Gazette that he has insisted the project be finished in time for the Games in November.

“Even though a 150-day contract extension [from October 5] was granted because of extenuating circumstances, I want to see the underpass finished in time for the Games, as it will enhance Phuket’s image for tourists who visit the island,” he said.

“I have ordered the project manager to send me a detailed progress report within three days.”

Governor Maitri specified some of the information he will look for in the report.

“I want to know about any problems the underpass may have and how the contractors plan to fix them,” he said.

“In addition, I want the project manager to be specific about the phase-one trial date, how he will address any problems that arise during that trial, the phase-two trial date and when the construction will be officially complete.

“Right now, the project is about 74 per cent complete. I want it done as soon as possible.”