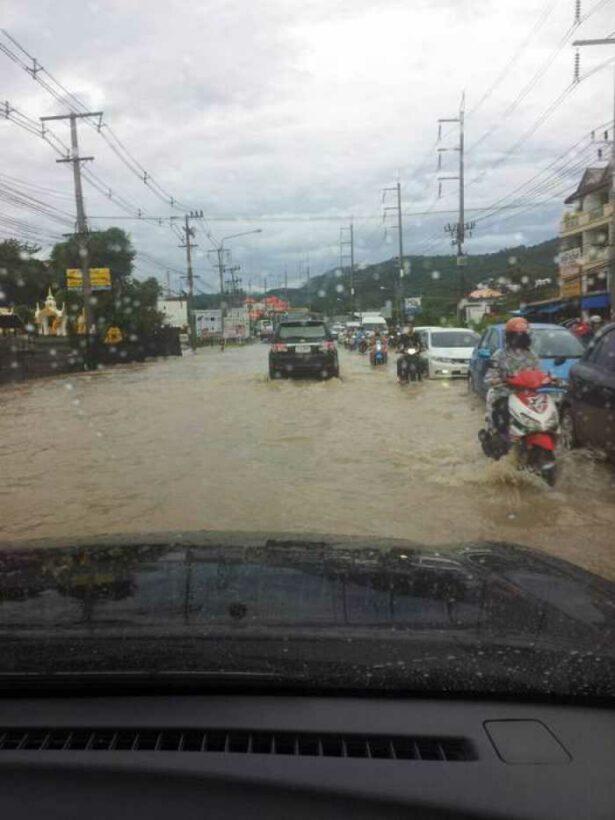 PHUKET: A flash flood and landslide warning has been issued for Phuket after heavy rain caused minor flooding and traffic tailbacks at many locations on the island this morning.

Flash flooding forced traffic to a standstill in Chalong in front of the TOT office on Chao Fa West Road, where floodwater was about 50 centimeters deep. Roads in Patong also suffered minor flooding.

A weather warning has been issued to every local office to warn residents about flash floods and possible landslides, confirmed the new chief of the Department of Disaster Prevention and Mitigation (DDPM) Phuket office, Santhawat Riwleung.

“According to the Thai Meteorological Department [TMD], the weather forecast shows cloudy skies with scattered thunderstorms and isolated heavy rain in Ranong, Phang Nga, Phuket and Krabi. Waves are expected to reach up to two-meters high in thunderstorm areas,” Mr Santhawat told the Phuket Gazette.

“Residents should pay attention to the forecast and stay up-to-date with news for your area, as we have issued this warning as a safety precaution.”