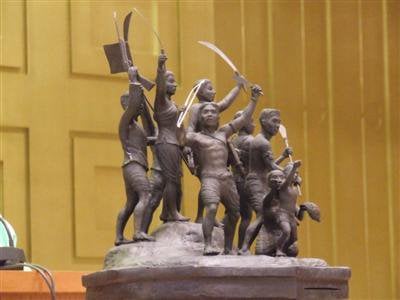 PHUKET: Five architects have emerged victorious in the opening skirmishes of a battle for the right to design a new 300-million-baht historical park commemorating the Battle of Thalang.

A committee comprising architecture experts, historians and local politicians has whittled a field of 12 full proposals down to just five.

The winning firms will now have until February 20 to produce scale models of their designs.

On March 1 the winner will be announced. The winning firm will receive 100,000 baht and the right to sign a construction contract for the project.

Phuket Governor Wichai Phraisa-ngop, who chairs the judging panel, said the winning model would be put on display at the annual Thalang Victory Memorial Festival that starts on March 13.

The Battle of Thalang made legends of Phuket’s ‘Two Heroines’, Thao Thepkrasattri and Thao Srisoonthorn, statues of whom grace the Heroines Monument close to where the new park will be built.

The pair, known as ‘Jan’ and ‘Muk’ before they were ennobled, led Siamese fighters in successfully repelling a Burmese invasion force in the battle in 1785.

The five grand designs, which put the heroines at center stage, all feature plenty of space for re-enactments of the victory.

At least one of the designs will see a large statue of the Two Heroines overlooking the park.

Managing director of local firm Able Architects, Pakhin Aunggulsant, is a member of the judging committee.

“We can’t name the finalists as it might affect the judging, but they are all quite famous,” he said.

“We’ve had five fantastic designs and it’s going to be really hard to decide who is going to win,” he added.