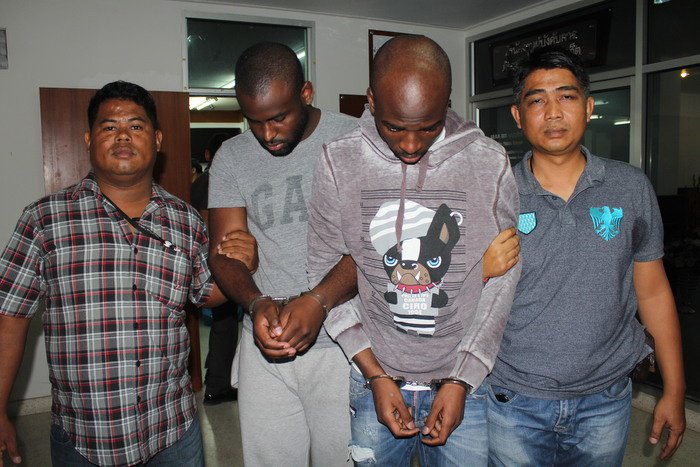 PHUKET: Police this week arrested five Frenchmen, one who was wanted by Interpol, for skimming ATMs in Kamala and Chalong.

The men are being held in Phuket without bail while police hunt down the sixth member of their gang, confirmed Phuket Provincial Police Commander Pachara Boonyasit.

“The men were caught after Phuket police received a report from the Financial Crime Suppression Sector of Siam Commercial Bank on February 27, which said that a group of foreigners had on February 22 started using fake ATM cards to withdraw cash from multiple ATMs in Chalong and Kamala.”

The bank sent police CCTV footage of the men, allowing officers to begin to track down the suspects and prepare evidence to make the arrests.

“We then began sending officers to the ATMs that had been skimmed by the men. On February 28, at 1am, we saw Mr Okito and Mr Poaty using the ATM in front of the Fresh Mart on Soi Hua Khuan in Kamala,” Gen Pachara explained.

“Mr Okito was using the ATM, while Mr Poaty kept watch. Police moved in on the suspects and were able to make the arrests.”

After questioning the men, police learned that four others were involved and had been staying at two houses on the island: one on Soi Hua Khuan in Kamala and another on Soi Prathana in Chalong.

“We went immediately to the house in Kamala. Luckily, the other four suspects were there. However, one of them managed to escape,” Gen Patchara said, adding that police were withholding the suspect’s name while they continue to search for him.

“In the house, we found 13 counterfeit ATM cards, the men’s passports, a laptop and three memory drives, which contained personal information from people who had been skimmed at the ATMs.”

The five men were taken to the Phuket Provincial Court this morning, where they are being detained without bail.

“The case has now been handed over to the court,” Gen Patchara confirmed.